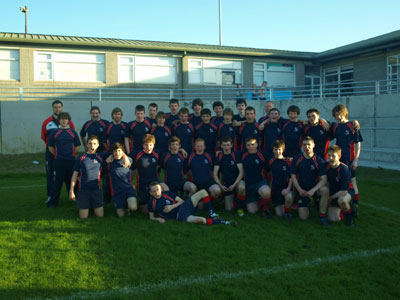 After arriving in Limerick City, the first order of business was a group tour of Thomond Park, which was thoroughly enjoyed by all.

After the tour it was onto Dooradoyle to watch the end of the Garryowen v Buccaneers AIL 1A League game which was won comfortably by the home team. Kick off for the Under-16’s game against Garryowen was set for 5.30pm and although the later time was unusual for a game – the weather took no prisoners and the full 80 minute fixture was contested in blistering heat with the home side running out the eventual winners.

Despite the result, Coolmine were in high spirits after the game after putting on what was easily their best performance of the season, contested in brutal heat and in front of a large home crowd who certainly breathed a sigh of relief when the final whistle was blown.

It’s been a busy season for the Under-16’s, as well as their league campaign they have played several matches against local college and touring sides. The squad recently also took on stewarding duties at the club’s fundraising walk in the Phoenix Park.