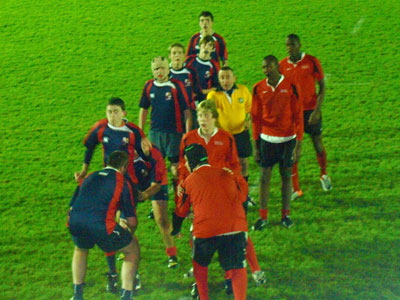 This London based academy is only three years old but fielded a strong side who pushed Coolmine to the very end winning 18-17. The two tries for Coolmine were scored by Aaron O’Brien and Sean Bolger, a conversion by Brian Farrell and O’Brien also added a drop goal and penalty to round off the score.

The game was played at a very quick pace and the cool evening made for an exciting game for the good crowd who braced the bitter cold and they were not disappointed by the quality of rugby.

Special thanks to all the parents who provided the food and hospitality for the visiting team after the game and the invite has been extended to Coolmine Under-16’s to return to Pimlico in the coming season for the return fixture.