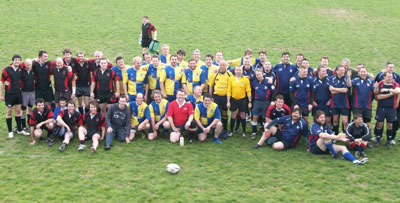 Coolmine RFC’s veterans and social team, the Wildebeests, marked the end of their playing season by hosting a three-team blitz at Ashbrook recently…

Teams from Unidare and Ratoath rugby clubs participated in the charity event and the round-robin games were tightly contested but played in great spirits.

Referees Ray Mooney and Tony Grehan not only encouraged a day of smooth flowing rugby but also managed to keep event timing on track to make sure the games were finished in time for the Manchester United v Chelsea Premiership clash.

As an added bonus, the good weather held up for the players to restore lost energies with a well-earned post-match BBQ.

The outright winner on the day was St. Francis Hospice, Dublin 15 – all teams donated their entry fees to the charity and supporters and guests also contributed to a post-match collection.

At the post-match BBQ, Coolmine captain Frank Maguire thanked the participating teams, organisers and supporters: “The blitz was a great way to wrap up the season and we are delighted that the event was able to contribute to such a worthwhile local charity.”