Cycling for CF Comes to Galway this weekend… 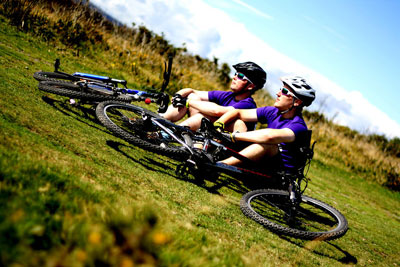 The lads left Dublin on Saturday, 9th October and the unsupported cycle, which will cover 2,500km around the entire coast of Ireland, arrives in Galway this Saturday, 23rd October.

The boys had the idea to undertake this adventure after a growing sense of frustration and powerlessness which arose every time they visited their friend, Cystic Fibrosis patient Avril McCarthy, in hospital.

According to Avril: “When the boys first told me about their plan to cycle around Ireland for Cystic Fibrosis, I was completely overwhelmed. It’s great to think that CF has inspired two of my very best friends to take on such a challenge. This cycle is just one example of the huge level of support which I receive from my friends and family.

“The boys came up with the idea because they felt helpless. I realise that they share my frustration sometimes, but instead of being miserable with me when I’m sick, the boys make me laugh.”

According to Conor Doyle: “For me the event represents a number of opportunities: to challenge myself on a personal level, to raise much needed funds for the CF Association of Ireland and to raise awareness of the lack of facilities for people living with CF in this country.”

Both Cathal and Conor are encouraging members of the public to support them on their journey and say hello along the route. Cycling for CF will be in Galway city this Saturday and Sunday and will do an on-street collection in aid of the Cystic Fibrosis Association of Ireland.

Cycling for CF will also be guests at the Sportsground this Saturday where Leinster face Connacht.

For more information on Cycling for CF go to www.cyclingforcf.blogspot.com