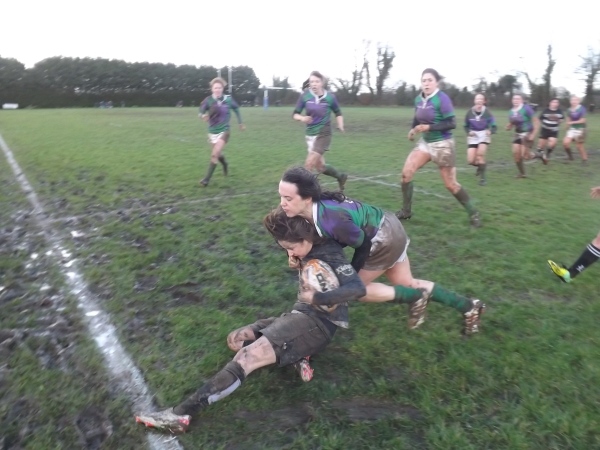 Both teams reached the final having topped their pools and then comfortably winning their respective semi -finals, making the final pair-up evenly matched. However, it was CYM who started the strongest when captain and first centre Diane McIlhagga intercepted the ball and ran in a try under the Belvo posts. She then converted her own score to put CYM 7-0 up with less than 10 minutes on the clock.

CYM continued piling the pressure onto Belvedere who rarely strayed into the CYM half in the opening 30 minutes. CYM then strengthened their lead when full back and MVP Brenda Healy made a fantastic break down the right wing to score in the corner to bring the score to 12-0. Belvedere fought back and the final moments of the first half saw them camped on the CYM line, but some brave body-on-the-line tackling from CYM kept them at bay. Half time score 12-0.

Belvedere started the second half as they had finished the first, continuing to attack the CYM defences. But CYM held firm before managing to secure the ball and retain possession for their own period of dominance. Then with under a quarter of the game left, CYM’s captain was yellow carded for repeated penalty infringements by the team. This led to some more pressure from Belvedere, but CYM’s defence was again resolute with the game ending 12-0.

The final whistle was greeted by some wild celebrations from the team and their supporters – celebrations which lasted well into the early hours!

There were strong performances throughout the CYM side, but worthy of note was the CYM front row of Suzi Glynn, Ciara Flanagan and Rachel Horan, who repeatedly won scrums against the head. While No. 8 Lucy Barry made some great catches in the lineout and half backs Jackie Flatley and Donna Clarke excellently orchestrated things in the backs. But coaches John Conway and Felix Byrne pointed to the fact that it was an overall strong team performance, particularly in defence and counter-attack, that won them the game.

CYM are now looking forward to life in Division 3 next season, but in the meantime they are enjoying the spoils of their victory before making a tilt at the cup in the coming weeks.