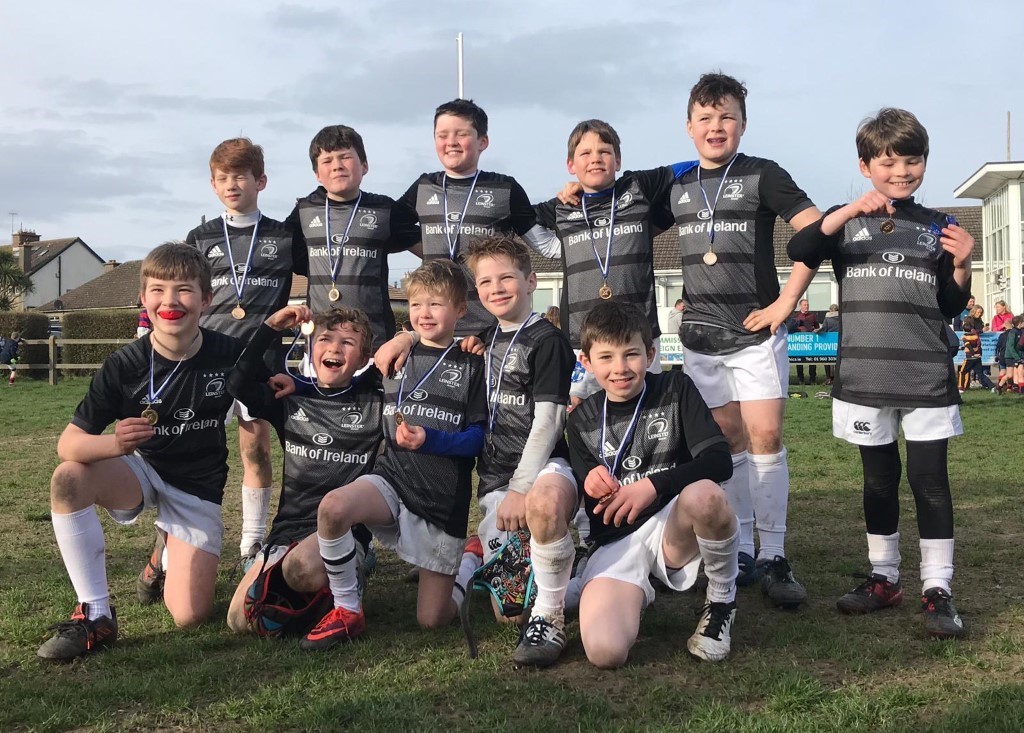 Dalkey in south county Dublin have put together a squad representing the Dalkey area in the Community Games Under-11 mini-rugby competition.

The team is made up of a mix of Seapoint RFC, Blackrock College RFC and various schools players.

Under-11 mini rugby squads have a panel of twelve players with eight players on the pitch at any given time. The IRFU Mini-2 rugby rules apply and each game comprises of two 15-minute halves with a half-time break.

Each team must first compete at the county finals to earn the represent their County and then compete in one of the four provincial finals for the right to represent their community and province at the National finals in Limerick.

Dublin Finals
Under the stewardship of Ian Rowlands along with fellow coaches Neil Keogh, Brian McGovern and Laurence O’Brien the Dalkey team have made steady progress through the Dublin and Leinster competitions.

As Dalkey has no rugby club itself a simple squad kit was required. So the black Leinster training jersey was adopted, along with white shorts and socks.

The squad’s first outing on 23rd march was to the Dublin County finals in Skerries RFC where the boys played and won highly competitive matches against Skerries in the semi-final and then Clontarf in the final.

Next up was a challenging Leinster quarter-final away to last years’ beaten finalists and Kildare champions, Kilcullen.

After a relentless game of last-ditch tackling and herculean defensive stands by both teams, Dalkey finally managed to win against an excellent team who will surely be back in the competition next year.

Leinster Finals
Next on the schedule was the Leinster provincial semi-final and final, both of which were played back to back on 27 April in Longford town.

Dalkey finally emerged victorious in their last four encounter to set up a final against a strong and talented team from Tullow.

The Leinster final was a relentless, end-to-end affair. Fantastic, free-flowing rugby, no-quarter tackling from both teams and a lead that changed hands several times made for a true nail-biter.

Both sets of players showed remarkable never-say-die spirit, with each team repeatedly taking a narrow lead before being pegged back by the other.

Finally however, in the last few minutes Dalkey scored a couple of decisive tries to emerge as narrow victors with a final score of 10-7. The match was a credit to under age rugby.

Captains and coaches from Tullow and Dalkey spoke graciously and then the Leinster Cup was the presented to Dalkey.

The newly installed Leinster champions were rightly delighted to receive the silverware and this Dalkey squad’s adventures are now set to continue.

They head to University of Limerick this weekend for the National finals where they will play other provincial winners in a semi-final followed by either a final or 3rd/4th place play-off. Best of luck to Dalkey.