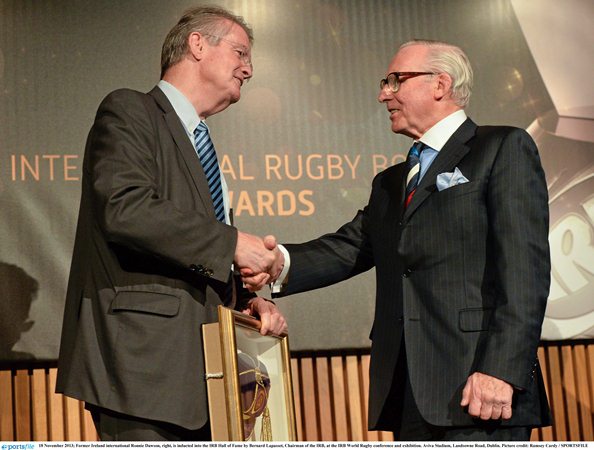 Eleven legends of the Game, with nearly 500 caps between them – including former Leinster, Ireland and Lions legend Ronnie Dawson – were inducted into the IRB Hall of Fame at the Aviva Stadium in Dublin on Monday…

Staged following the conclusion of the opening day of the inaugural IRB World Rugby Conference and Exhibition, the British & Irish Lions and Australia themed ceremony attracted a number of notable guests as the global rugby community came together to celebrate past glories.

To say homegrown hero Dawson’s induction brought the roof down is probably not the best turn of phrase given his profession as an architect. However it’s true to say the Dublin-born hooker received a great reception from those present at the Aviva Stadium. The Ireland international led the Lions six times, a record since matched by Martin Johnson, and went on to serve the tourists as both a coach and selector.

IRB Chairman Bernard Lapasset said: “The IRB Hall of Fame recognises those who have made an indelible mark on our sport through feats on the field of play, displays of great character or through their tireless and inspirational work in driving forward our great Game.”

“The British & Irish Lions are an institution, a symbol of our history, our present and our future and tours to Australia have delivered bountiful unforgettable memories. These inductees, legends in their own right, have stamped their own mark on this incredible piece of Rugby history.”

An architect by trade, Dawson played for the Wanderers club in Dublin, Leinster, Ireland and the Barbarians. He won the first of his 27 Irish caps against Australia in 1958 and was selected for the Lions in 1959.

An outstanding leader of men he captained his club, province, country and the 1959 Lions on their tour of Australia (six matches), New Zealand (25 matches) and Canada (two matches). A keen Barbarian he played 22 times for the club without fixed abode and captained them on several occasions, including their historic win over South Africa in 1961 – the only defeat of the tour.

He made the first of his 17 Lions appearances against Victoria, leading the Lions in six Test matches, a record since equalled by Martin Johnson. The 1959 Lions played a similar attacking brand of rugby pioneered by the 1950 tourists, running the ball at every opportunity. They scored 842 points in 33 matches, a record for a Lions team.

Dawson was unavailable to tour South Africa with the Lions in 1962, but was appointed assistant manager/coach of the 1968 Lions captained by Tom Kiernan. He became an Irish and Lions selector and was appointed as the first coach of Ireland in 1969.

He became President of Wanderers, Leinster and the Irish Rugby Football Union and chaired the IRB Council, on which he served for 20 years (1974 to 1994).

He was the member of the first Rugby World Cup Organising Committee. He was received with the IRB Vernon Pugh Award for Distinguished Service in 2004.

The IRB Hall of Fame was launched in 2006 with the induction of Rugby School and William Webb Ellis. Since then the following legends have been inducted: