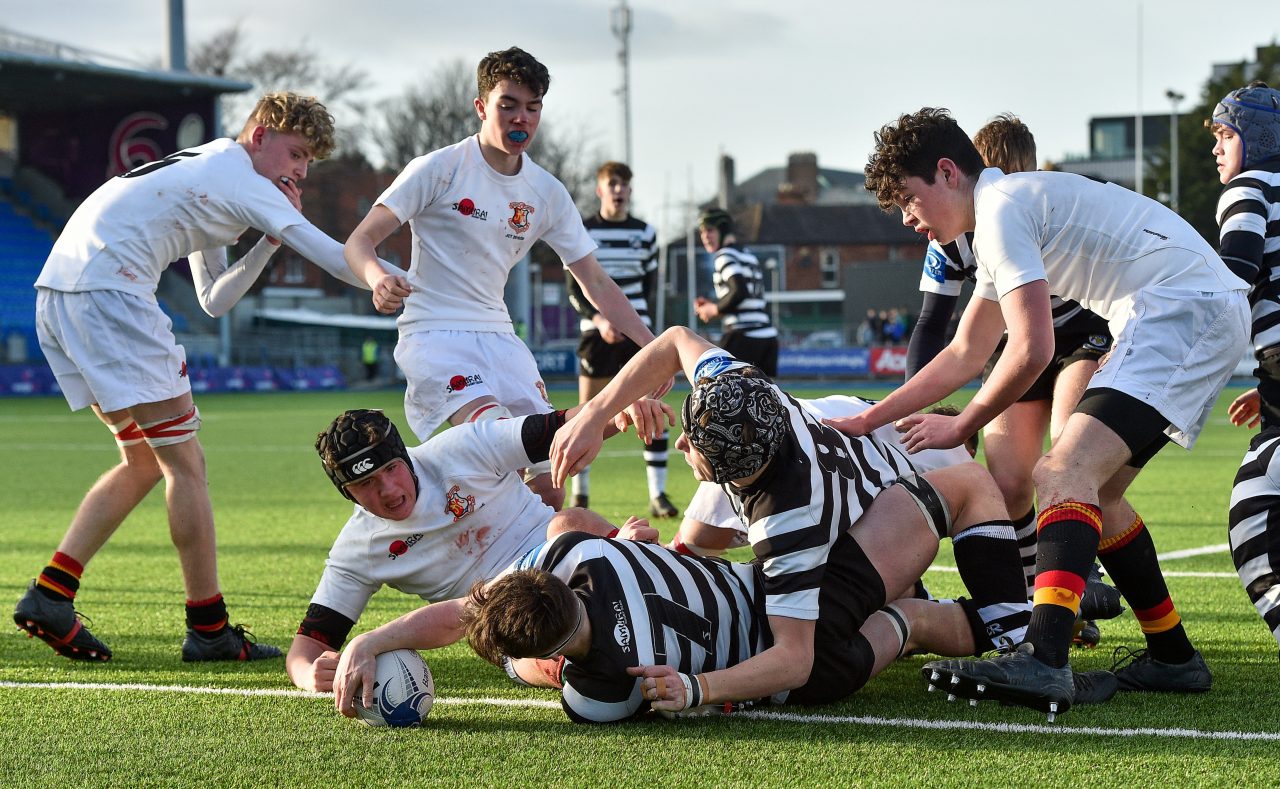 Cistercian College Roscrea managed to see off Pres Bray today in a highly-entertaining contest at Energia Park in the Bank of Ireland Leinster Schools Junior Cup.

Despite having no score after the interval, both sides played out a thrilling affair that ended with Roscrea being forced deep inside their own territory to defend a five-point lead, which they duly did.

They book their place in the next round alongside St Michael’s College and Newbridge College.

Roscrea used their superior physicality well in the opening exchanges, letting the pack put some pressure on Bray.

And but for a couple of handling errors in key areas, they may have taken the lead earlier.

The breakthrough finally arrived in the 13th minute, Max Flynn taking the ball from the back of a scrum before playing in centre James Conroy to touch down.

They weren’t waiting as long for the second try as captain Greg Fitzgerald added another five points just two minutes later, an effort that was converted by Fabien Fleetwood.

Pres responded well to that 12-point blitz and when Jack Murphy was given to chance to have a shot at goal, he instead showed trust in his maul and opted for the corner.

That faith was rewarded as Pres won their own ball and went through the phases before Adam Tighe managed to drive over from close range.

In fact, they then matched Roscrea’s earlier quickfire double with a brace of their own. The second came courtesy of a Finn Treacy break from his own half and, despite a last ditch attempt at bringing him down by Charlie O’Sullivan, he was able to go the distance.

Ros had one final push left in them before the end of the opening 30 minutes and with strong carrying from Conroy, they managed to get into a good position that Richard Whelan was the main beneficiary of. The blindside powered over from close range to restore their advantage.

The Bray students thought they had regained parity in the second half when Finn Brien squeezed through from close range but the whistle wasn’t forthcoming and they had to recycle the ball once more giving Roscrea the opportunity to force them to touch.

From the lineout, Whelan broke free and seemed almost certain to get his second try of the day only for Pres captain Treacy to come racing back and drag the flanker over the touch line.

They controlled possession from there on in search of the score that would turn the game in their favour, coming closest when Lorcán Smith fed the ball back inside to Dylan Henry but his burst into Roscrea territory was halted by a break in play for an injury.

The resulting scrum saw Pres resume their siege on the Ros line but the impressive Conroy managed to force a penalty and provide some relief for his teammates.

Bray weren’t to be deterred and came quickly again. This time Murphy, with advantage on his side, opted to go over the top and Treacy was just beaten in the race.

Eventually, Roscrea were able to force a knock on and welcomed the final whistle at the end of a draining period of play where No 8 Max Flynn was the stand out amidst a defiant defensive stand.