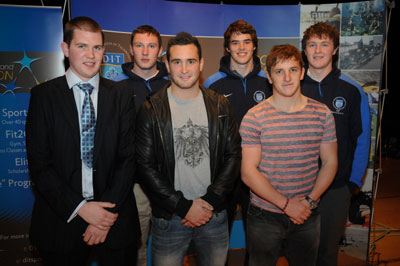 Dublin Institute of Technology Rugby Club has over 130 members, one fifth of whom are female members…

The membership includes those from various rugby backgrounds, those playing All Ireland League rugby to those who play tag rugby for recreation.

The club boasts three Male teams with both the 1st XV and Freshers XV having competed so far this season, while the 2nd XV season commences in February. Over the course of the year so far close to 50 different players have attended training for the club and these teams accommodate all levels of experience and ability. The Freshers XV, in particular, hosted a number of new players this year who were experiencing competitive rugby for the first time, and it is great to see the team compete while also offering opportunities to lads who have never played before.

Women’s Rugby is also an area the club are focused on developing within the college and progress has already been made in getting more females involved in the club. Hopefully with time and effort, Women’s Rugby will continue to grow and develop in DIT.

A new development this year has been the introduction of weekly Tag Rugby which is aimed at members of the club who just want to play for recreation and enjoyment and give them an opportunity to make new friends and to meet up each week. Numbers continue to grow, with males and females as well as novices and experienced Tag players turning out. An Inter-Class Tag Rugby Day is scheduled for February, when students return to college, and this will hopefully see even more people introduced to Tag Rugby and they can experience the fun and excitement of playing Tag Rugby.

As well as on field activities, the club contributes to assisting the growth of rugby through several off the field endeavors in the college. In association with the IRFU Colleges Development Officer Eoin Hogan, an Associate Referees’ Course is planned to take place in the next few weeks which will be open to all members of the club as well as hosting members of other institutions across Leinster. The club is also heavily involved in the planning and implementation of a new initiative in DIT called Developing Women Through Sport which will be aiming to develop the leadership and communication skills of females both in the college and in the wider community and will incorporate a rugby coaching module.

There is also an important social side to the club which has held a number of club events after games so far this year with plenty more planned after the return to action in February, including a club trip to a Leinster Magners League game, as well as the highlight of the Dublin IT rugby calendar – the annual grudge match between the Northside Campuses and Southside Campuses for the prestigious Gleeson Cup.

All members can keep up to date with the events planned in the club and other activities or events through the new Club Newsletter which was started this year and new editions are sent to members regularly.