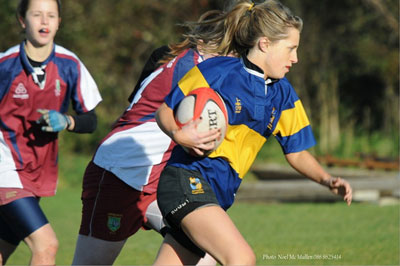 After kicking off the season with a flying start, Rathdrum Ladies team ‘The Drumettes’ finished second in the Leinster Development Division 4 League…

The Drumettes started the new league campaign at the weekend with an away game to Portarlington for the first match of the Division 3 League, seeing the Drumettes promoted.

Speaking about the promotion of the team, ladies captain Grainne O’Kelly said; “This promotion is a firm recognition of the dedication, hard work and fantastic team spirit the girls have shown since the start of this season. We are delighted to be promoted to Division 3 and being given the opportunity to play contested scrums against some great teams who we have met in the past.”

On Sunday Rathdrum Ladies travelled to Portarlington to take them on in the first match of the new league. Having met each other twice last season (the latter being in the semi-final of the Development league where Rathdrum were pipped to the post under the first try rule having drawn 13-13), the Drumettes were edged 17-5.

Next game for Rathdrum Ladies is this Sunday at home to Clondalkin in the Ivy Leaf, kick off 1pm.

Training takes place at the Drumettes home of Ivy Leaf grounds, Rathdrum on Tuesdays and Thursdays at 7pm. Senior Men’s training is Wednesdays and Friday. For more information on how to join a strong, determined and growing Rathdrum Ladies team, text Grainne on 086-3994244.