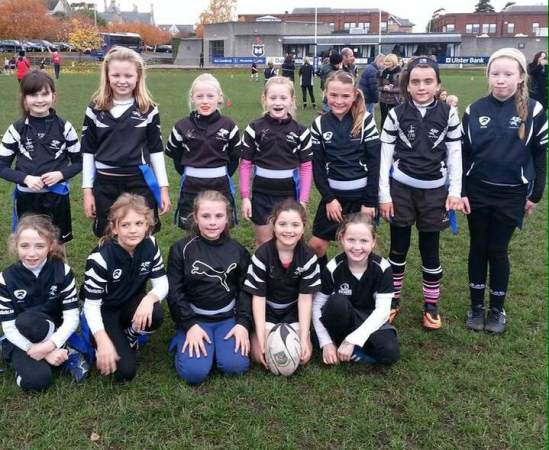 Once again Dundalk girls travelled in numbers to Blackrock RFC to continue their drive for success in the Leinster Tag League. Blackrock have already proved to be strong competition and this encounter was no exception. Blackrock fielded a hugely experienced team in age and size. Dundalk fielding much younger players, proved to be a big challenge.

However Dundalk were not going to let these odds get to them and in the first minute Katie McGee made her mark by running in a try. Blackrock came back very strongly and displayed some magnificent, well-tuned set play. At half time they had crept up a 9 – 6 lead. Never giving up, Dundalk came back at them in the second half with sheer pride and determination and got their game on in style.

Tries were run in by Katie McGee, Aoife Malone, Zoe Valentine, Orla Conway, Liby Turnbull and Meadhbh O’Callaghan in what was a very fast paced and exciting game to watch. A huge defensive effort for Dundalk with Niamh Craven, Shona Kelly, Aoife Craven, Meadhbh O’Callaghan giving it their all defensively. The game ended in a draw and Dundalk girls could breathe a sigh of relief for a hard fought encounter by all girls!

Our unbeaten Under 12’s continue their march towards League success with a hugely entertaining game in Blackrock today These girls displayed sheer grit and determination against a somewhat startled Blackrock side. The defensive play by Dundalk was textbook stuff, making Blackrock’s task very difficult indeed. However they stayed the pace and came back at Dundalk time and time again, making it a hugely entertaining encounter.

Huge defensive game today for Eva Toal, Robyn Coan, Clodagh Flynn and Holly McEntegart. Eva Toal deserving a special mention for her absolute detemination and tenacity in this game, a joy to watch. Tries run in by Caoimhe O’Callghan in her usual superb style, along with the fast paced Temi Fagbamilla, Eva Toal and the stylishly paced Chloe Ticehurst.

All the girls on this side are a credit to themselves and the club they play for. Their flare and dedication is wonderful and a team that are destined for success.

The under 10’s came up with the goods again today in a great encounter against a well matched Blackrock side. The under 10’s got into the game from the first whistle and declared their intentions. Fast tries run in by the fabulous duo of Lily McEntegart and Tara Herr. Followed by more tries from Natasha Swan, Aoife Bermingham and Sophia Murdock.

This team is made up of quite a few new players, but they all got stuck in and gave it their best. Blackrock proved no real competition and a joyous under 10’s team finished off in style with a good victory.