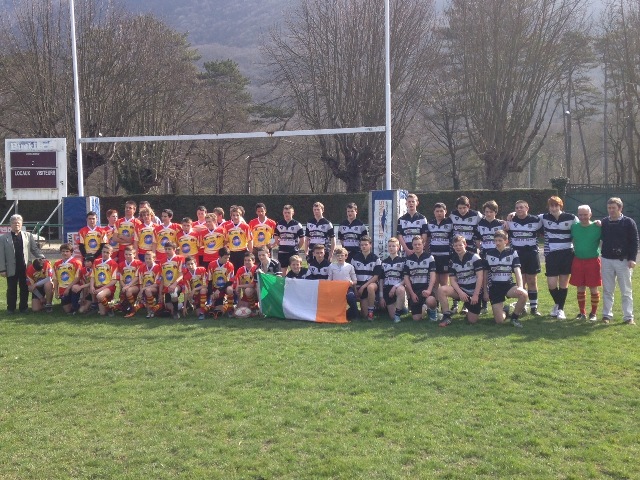 That was the agenda laid out for Dundalk U’!5’s when they travelled to France on St. Patricks weekend for what was to be a memorable few days for all concerned and indeed for Irish rugby…

Flying out early on Friday morning from Dublin to Lyon, the touring party consisting of 18 players and 7 adults made their way to Vizille a most beautiful mountain locked small town approximately 10 miles from Grenoble in south-east France.

Without much time to shake off the cobwebs the team lined out to face their hosts in what proved to be a beautiful free-flowing game of rugby. The emphasis all season has been to keep the ball alive and encouraging players to express themselves without fear of making mistakes and learning from them as opposed to fearing them. The coaching team of Dundalk CCRO Gerry O’ Hara and Mark Dorian had in fact placed a ban on all kicking throughout the game with the players being told to find a way out of any situation, even behind their own goal-line, other that by the boot. Having great memories of watching France turn on the style over the years, albeit sometimes at the expense of the Irish, how wonderful and refreshing it was to see an underage Irish team go to a hotbed of rugby in France and show their hosts that they don’t have the sole rights to rugby played with pace and style.

Dundalk attacked at every single opportunity outscoring Vizille by 7 tries to 2. This match was also used to try players in different positions and what a benefit that proved to be with current number 13, The Carrick ‘Flyer’, Patrick Birmingham switching to the wing and using his scorching pace to score 4 tries, waltzing around numerous defenders in a man of the match performance. The match was followed by a meal in the clubhouse where gifts and ties were exchanged before the players went to their generous host families and the adults retired to their hotel in Grenoble.

The following morning saw an early start as our lead host Walter had organised a ski trip for the touring party. There was huge excitement for all as many had not skied before in fact some had never been out of the country before. On this occasion however there was to be no contest with the French displaying elegance on the slopes that few could match, not without trying it has to be said.

The prize however for the quickest descent of the day did go the Irish way with scrum-half Jack Hughes deciding that if there was a risk of missing the France-Ireland match on telly, it was a risk he wasn’t willing to take so Jack decided to hail a Helicopter from the top of the mountain back to the base, a quick descent or what!!!!! In truth Jack had taken a tumble on the slopes and although he was fine the support teams on the mountain were taking no chances and called the Rescue Helicopter. When Jack arrived back at the Medical Centre he almost immediately took off his neck brace and proceeded to walk around and rejoin his team mates.

The real question of course being “Was this a bluff Jack”? “Did you go to all that trouble just for a spin in a Helicopter”? We have heard about precious half-backs before but really!!!!! Anyway all’s well that ends well and boy did it end well with that most incredible victory in Paris that evening which was watched back in the clubhouse in Vizille. What a day, what a weekend.

As if the French hadn’t had enough of us at this stage the teams again lined out on Sunday morning with Dundalk continuing in the same mode as when they arrived running in some glorious tries as a result of some fine running lines and movement of the ball at pace. The lovely weather made it ideal for the barbecue that was to follow before everyone took some time to view the beautiful surroundings.

Monday morning saw the touring party visit Chateau Vizille, a most stunning building with surrounding lands. This in fact is the Chateau where the first plans were drawn up for The French Revolution. In view of this and accounting for the fact that the Irish had inflicted a lot of damage on French soil over the weekend it was decided that it would be best to advance to Lyon airport and the safety of Irish soil before we became embroiled in the next revolution for which we may have been held accountable !!!!! The image of the Guillotine in the museum may have played some part in this. As George Hook often says, ’Nothing concentrates the mind like a hanging in the morning”.

This was a hugely successful and, most importantly, enjoyable tour, made possible by the Trojan work done by Team Manager Paul Donnelly and his equally hard-working other half Caroline to whom we are all so grateful. We would also like to thank most sincerely Walter and all the host families in Vizille for their kindness throughout and the manner in which they looked after all the lads. Finally we would like to thank Gearoid Mc Mahon, father of our second-row Eoin. Gearoid runs his own business in France and so provided translation services throughout, but most importantly he provided many colourful stories around the dinner table on Sunday evening in Grenoble that had all the adults in tears, of laughter of course.

Of course I’m not going to put these to print, as they say Gearoid, what goes on tour stays on tour!!!!!
Bon Voyage