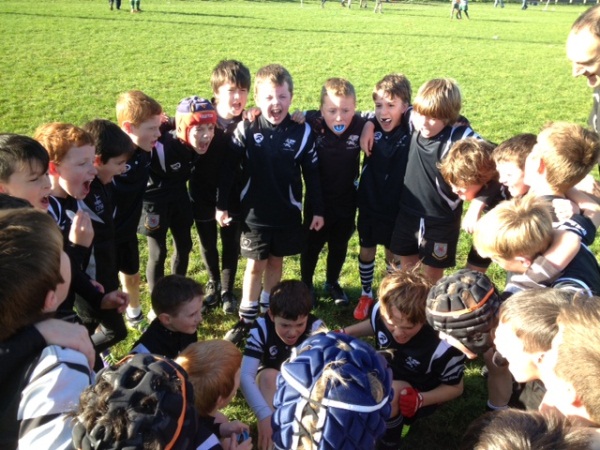 After a tough encounter with Navan the previous fortnight which they were lucky to edge, the Sharks really wanted to lay down a marker in the Gold section of the Metro League, hoping to set themselves up for another fantastic season. Greystones brought 2 travelling teams and the sharks split themselves into two evenly matched teams, the Black Sharks guided by Manager Jason Malone, Mini Co-ordinator Fergus O’Callaghan and John McDonnell and the White Sharks guided by Paul McEvoy, Hugh Pheifer and Dundalk 1st team star James McConnon.

The White Sharks ran riot against their Wicklow based counterparts surging into an 8 try to 1 lead before Greystones rallied at the death to bring a bit of respectability to the scoreline. Dundalk tries were scored by Aaron McGuinness (2), Joseph Pheifer, Mark Leavy, Lorcan Ticehurst, Ciaran Tiernan (2) and Kieran McArdle. Aside from the try scorers it was a wonderful all round performance with the likes of Fiacra O’Gorman, Peter Rice, Lorcan Rice, Cillian Halpenny, Mark Leavy, Aron McEvoy, Tadhg Dunne, Eoghan Staunton all doing their bit to help the Sharks cause.

Match 2 was even more of a procession for the imperious sharks; a 7-0 victory coming thanks to more great performances from those named above and tries from Eoghan Staunton (2), Joseph Pheifer (2), Aaron McGuinness, Luke Andrews and Niall Brennan. A fantastic all round team effort from the White Sharks.

The Black Sharks didn’t disappoint either, with fantastic forward play and competing at the ruck from the likes of Ronan McDonnell, Fionn Duffy, Calum Grant and others, being complemented by fluid passing and running play from the likes of Conal O’Callaghan, Sam Malone, Robert Malone, Brian McCahill, Milo Moore, James O’Connor and Leo MacRuairi. Also very noticeable was the increasingly influential contributions from newcomers Sean Leonard, Ben Wogan and Aaron Speight. The first encounter ended 3-2 courtesy of tries from Sam Malone, Leo MacRuairi and Ronan McDonnell. The second match was a 6-4 victory for the Black Sharks with tries scored by James O’Connor, Fionn Duffy, Sam Malone (2), Milo Moore and Leo MacRuairi.

Team Manager Jason was delighted with a clean sweep and more importantly believes the lads have now clicked into gear and firing on all cylinders with work in training starting to bear fruit. It bodes well for the undoubtedly tougher challenges to come.