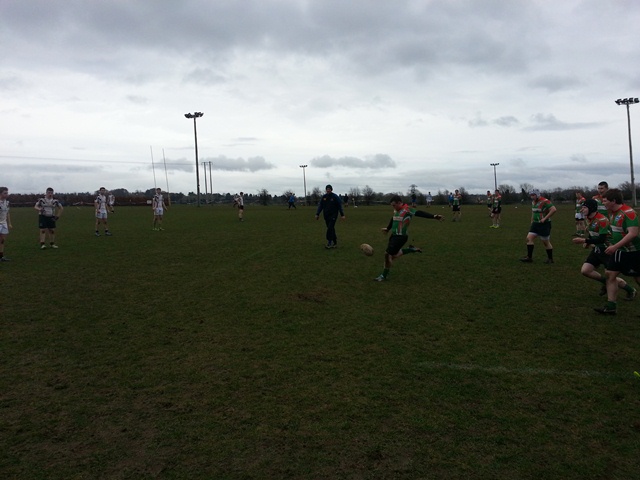 The game was played on the 5th of March in Carlow rugby club and was fiercely contested by both teams with a high standard of attacking rugby on display from both schools. Dunlavin played with a strong wind in the first half and used it to their advantage early by scoring in 6th minute with a try from blindside flanker Ross Tyrrell,  the conversion was added by Eoin Murtagh. Bagenalstown hit back in the 11th with a try from Keith Lillis converted by Jackie Barron.

Dunlavin took control of the game with good work from their front row, they got the upper hand in the scrums and dominated possession with Murtagh’s strong mid field running too good for the Bagenalstown defense and he scored under the post and added the conversion himself.

Dunlavin were then awarded a penalty try after a clever kick in behind by out half Jack Cullen was not dealt with and Dunlavin winger was tackled without the ball, the referee was left with no option but to go under the posts with Murtagh converting. Dunlavin extended their lead further when Gerald Healy intercepted a loose pass and sprinted clear to touch down under the posts with Murtagh on hand to add the two points to make the score 28 – 7 with 25 minutes gone.

Bagenalstown retained possession with a series of carries in the Dunlavin half and the ball was moved wide for Jamie McCabe to score with Barron adding the two points to leave the half time score 28- 14 to Dunlavin.
Bagenalstown started the second half brightly and smart play from Barron put Lillis over for his second try with Barron also converting to close the gap to 7 and the teams were level when Liam Cummins crashed over in the corner from short range which was brilliantly converted from the sideline by Barron.

Both teams had chances to win the game but it was Dunlavin who finished the stronger and prop forward Tony Sheridan scored the winning try with Murtagh converting. Special mention must go to both kickers Eoin Murtagh and Jackie Barron for their excellent display of skill from the tee and out of hand given the testing wind.