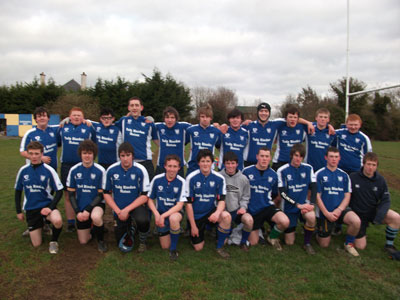 The game took place in Ashbourne Rugby Club, and what a game it turned out to be. Both teams had not played in the last couple of weeks but the game got off to a flying start. Dunshauglin had probably the better of the early exchanges and should have probably scored 15mins in when prop forward Eanna Brennan made a barn-storming run from half-way to get to within 5 metres of the Ashbourne line.

Dunshauglin were then held up. Ashbourne’s defence held tight and with their No.8 given them great go forward ball their backs were causing Dunshauglin some problems. With mistakes and indiscipline slowing down the game the teams went in 0-0 at half time.

The indiscipline for Dunshauglin continued after half-time and continuous penalties led to Ashbourne taken a 3-0 lead with a good kick from their full-back. Dunshauglin started to come back into the game with some great carries from forwards Dara Smith and Niall Hannon given a great platform for centre Brendan Bowe to make great yards.

Dunshauglin got over the Ashbourne line again but were adjudged to have been held up. Ashbourne cleared their lines with some great kicking but full-back Michael Lennon was always sure under the high ball. With only ten minutes to go Ashbourne received a penaltie in a good position and took their points to lead 6-0.

With time running out for dunshauglin they really showed great skill and determination to get themselves back in the game. Right at the death captain Larry Roach got over for a try to make it 6-5. It fell to out-half Fergal Cleary to win the game for Dunshauglin, it wasn’t an easy kick far out on the right but he held his nerve to slot it over and put Dunshauglin into their first Semi-Final.