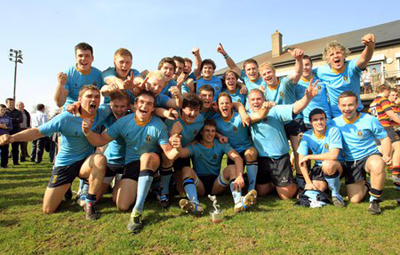 There were plenty of bruising hits from both sides in the first half leaving few scoring opportunities. However, it was behind the scrum where Lansdowne, despite the excellence of Craig Ronaldson, lacked the cutting edge of their opponents.

Lansdowne matched them in the physical stakes, and fought their way back into the contest with a spectacular Craig Ronaldson penalty.

Robbed of influential prop James Treacy early on through an eye injury, UCD refused to buckle. Rory Hannon came into the fray and produced an outstanding performance capping it off with a superb try on 22 minutes.

After securing a lineout 25 metres out on the left, Hannon made the initial charge, and in spite of an overlap on the right, he opted to barrel forward forcing his way over in the corner.

Earls missed the conversion, but a penalty from a similar position ten minutes later increased the scoring margin.
Despite an error-strewn opening half, the game never lacked the ferocity and was at all times exciting and intense.
Lansdowne replied after relieving some early pressure, through their main asset behind the scrum Ronaldson. His two penalties cut the deficit to five points at half time (9-14).

UCD edged further ahead on 50 minutes. A sweeping move from right to left involving Peter Du Toit, Hannon and Alan O’Connor ended with Lynch crashing over under the posts for a well constructed try.

Earls and Ronaldson traded a brace of penalties a-piece between the 52nd and the 65th minute as both sides thrived going forward.

Lansdowne cut loose after this period through the voracious work-rate of their pack. A scrum on the five presented them with their best scoring chance of the contest. Scott Caldbeck and Jack O’Connell broke forward, but were hauled down. O’Connell took possession again, and from this attacking platform, Ronaldson moved the ball at pace out wide on the left with centre Harry Kennedy crossing the line.

UCD demonstrated remarkable composure to close out this contest, despite conceding a last minute try. They had their stars from 1-15, but when it was required, Niall Earls stepped up and led by example. His penalty on 70 minutes settled proceedings and instilled that winning mentality back into his side.

Lansdowne will rue the missed opportunities, and to their immense credit they battled to the final whistle but UCD kept their line intact holding off for a deserved victory.