Early Bird price extended for the School of Excellence… 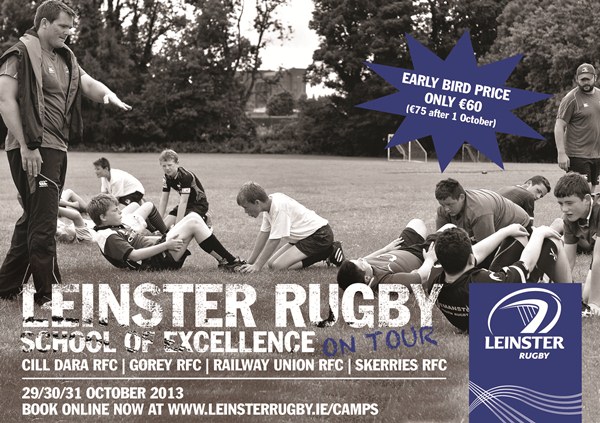 Leinster School of Excellence on Tour is catered for players aged between 10-16 years old who want to learn to play rugby the Leinster Way. Players who participate in the camps will develop their skills, obtain a greater understanding of game awareness and learn about rugby values such as team work, commitment, integrity and communication.

Other skills that emphasis will be placed on include; passing, evasion, kicking, tackling (in a controlled environment) and contact will be introduced depending on the age and ability of the group. Camp goers will also gain a greater understanding of the importance of physical fitness and get the chance to make loads of new friends.

Players who attend the Leinster School of Excellence on Tour will be coached by Leinster Rugby employed staff that all have a vast amount of experience in providing top quality coaching to these young teens. To facilitate the appropriate attention given to each participant during the three days, camp goers will be split into groups of 15 depending on their age. Camp goers will also get a chance to get their pictures taken with Leinster’s Silverware and get some Official Canterbury kit.

Camps are only €;60 if you book before the 15th of October and €;75 thereafter, so sign up today at www.leinsterrugby.ie/camps.