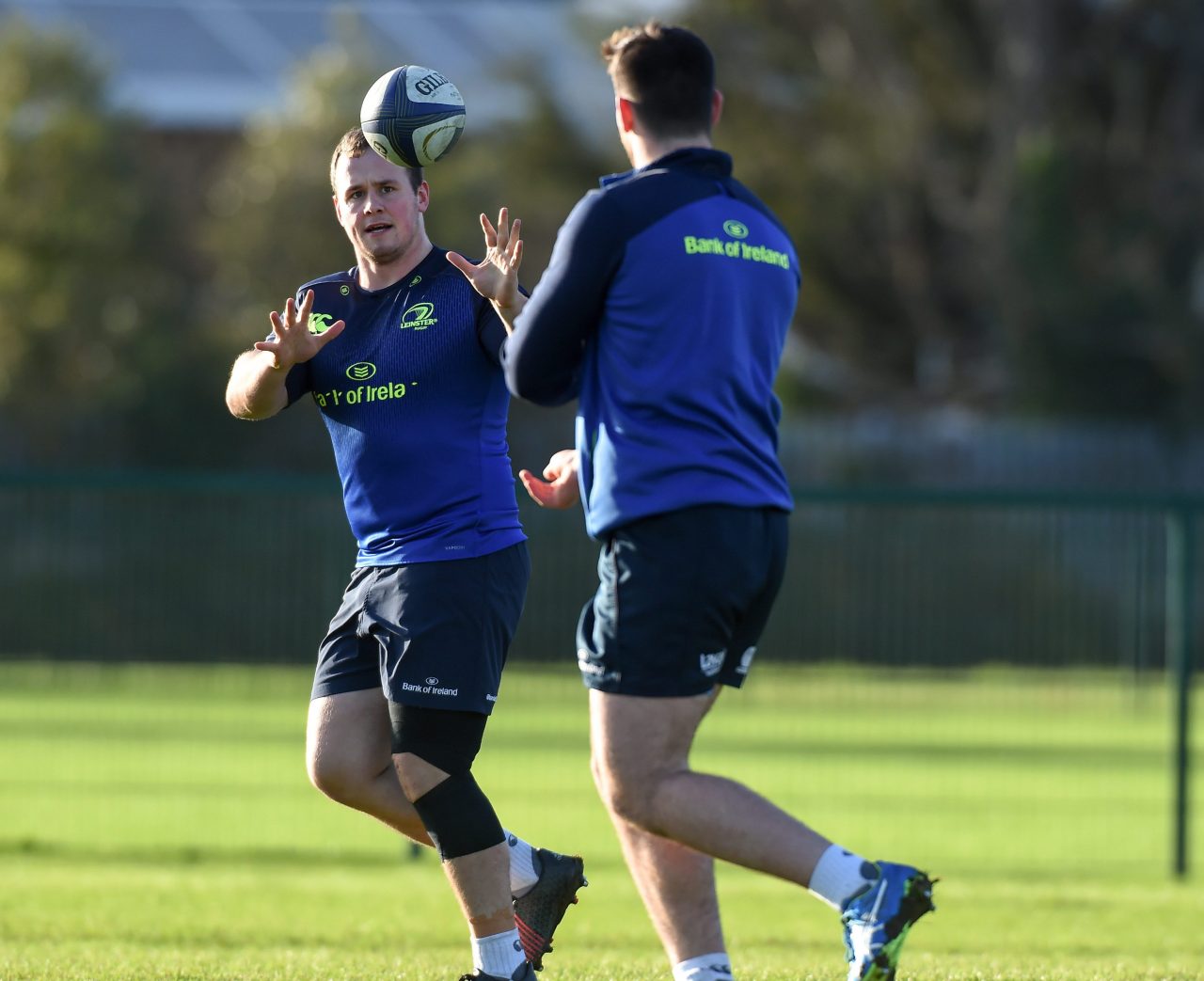 This is a story that has been well told. Carlow prop Ed Byrne was carving out a nice career for himself having graduated from the Leinster Academy and into the senior side.

A debut off the bench in February 2014 against Zebre and then early the following season he started to make serious hay as another four caps were added. He was clocking up minutes and memories.

There was lining up for a scrum in the RDS with his twin brother Bryan playing at hooker beside him.

There is that iconic Aviva Stadium photo of him bursting through a Paul O’Connell tackle. Full of energy, drive and determination. The wheel was turning in Byrne’s favour. Then it stopped. 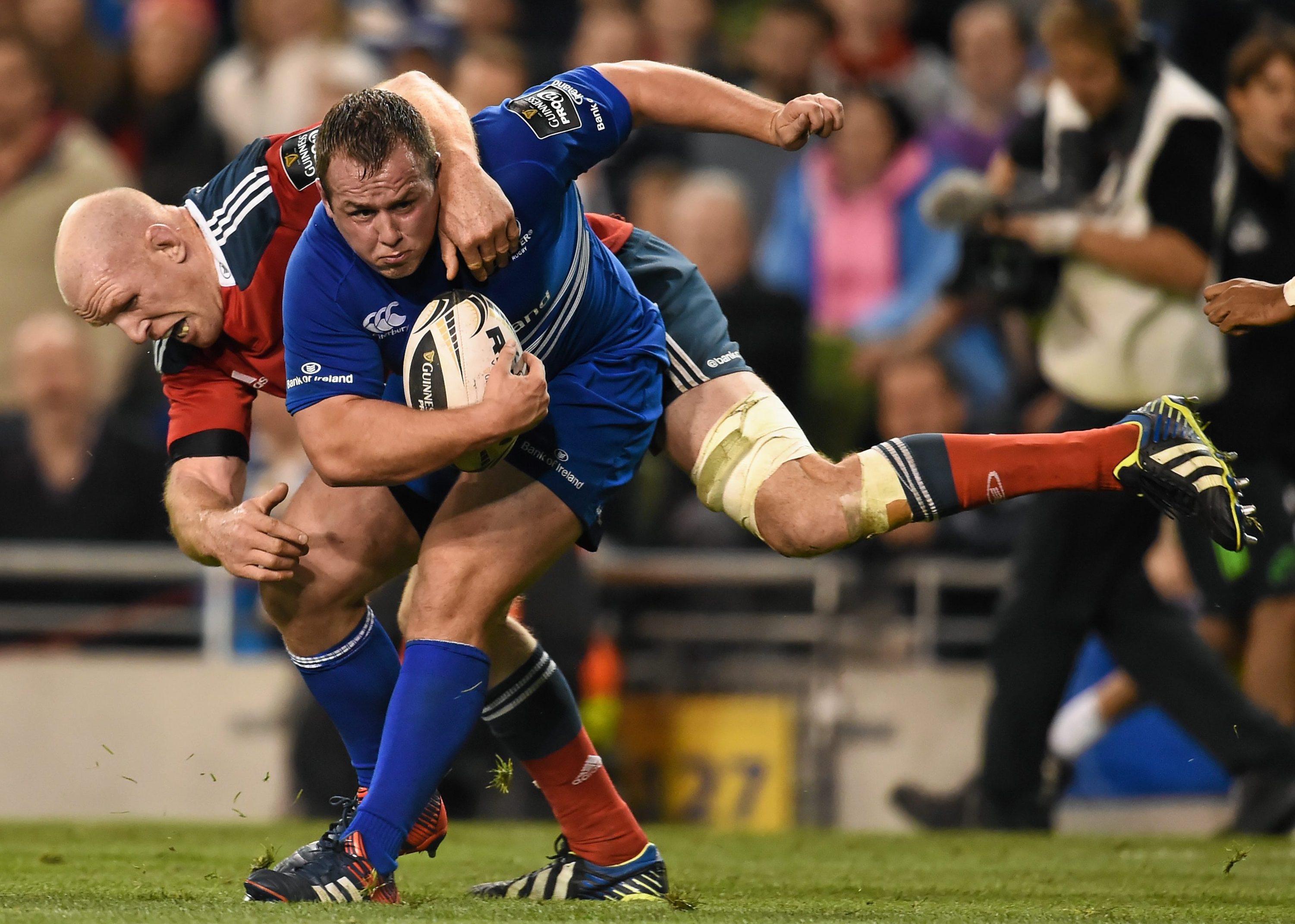 A knee injury, ACL to be exact, late in the Edinburgh game in October 2014. Six months out and then we’ll see said Matt O’Connor at the time of a player who “was a very popular member of the Leinster Rugby set-up”.

The comeback was longer than expected but he was penciled in for an appearance off the bench against Ulster in the pre-season friendly in Kingspan Stadium in August 2015.

Fast forward to January 2017. It’s been seven minutes of rugby in over two years and three months but Ed Byrne is back and he is ready to build momentum once more.

The first step was pulling on a UCD jersey again.

“It’s very clear in the mind. Played out in Seapoint and we’d a good win in the end but I was just itching to get on and thankfully I managed to get on for a full 40 minutes. Not everything was perfect – how could it be after so long out? – but it was just great to be out there again pulling on a jersey and playing the game I love.”

Not surprisingly, the last bit is said with a broad smile. Overriding emotion of joy, you venture?

“Actually no. It was relief. Like there were some days that were really tough and, to their credit in Leinster Rugby and the S&C team and physios, everyone, they couldn’t do enough for me and they helped me every step of the way.

“But that doesn’t mean that there aren’t setbacks or days when you think a day like that in Seapoint might not come again. So I was just relieved to play again.”

That relief would also have been helped by a try to his name for good measure.

“I managed to cross the white line but I’d have to give credit to the rest of the lads there but I suppose it put the icing on the cake alright. Everything that could go right for me that day, did.”

As Matt O’Connor referenced in 2014, Ed Byrne is a popular guy and that was reinforced that day when his Leinster Rugby senior colleagues turned out in force for a routine AIL game in Seapoint. They knew what it meant.

“It’s the cliché that of course I was focused on the game but I couldn’t but spot a few of the Leinster lads watching on. This game had nothing in it for them but they were there. A few of my friends were there too. Like it’s a long road back so to come off the pitch at the end and to see those familiar faces meant so much.”

And twin brother Bryan was there too. They took a photo after the game to capture for the scrapbook. Team-mates. House-mates. Mates. 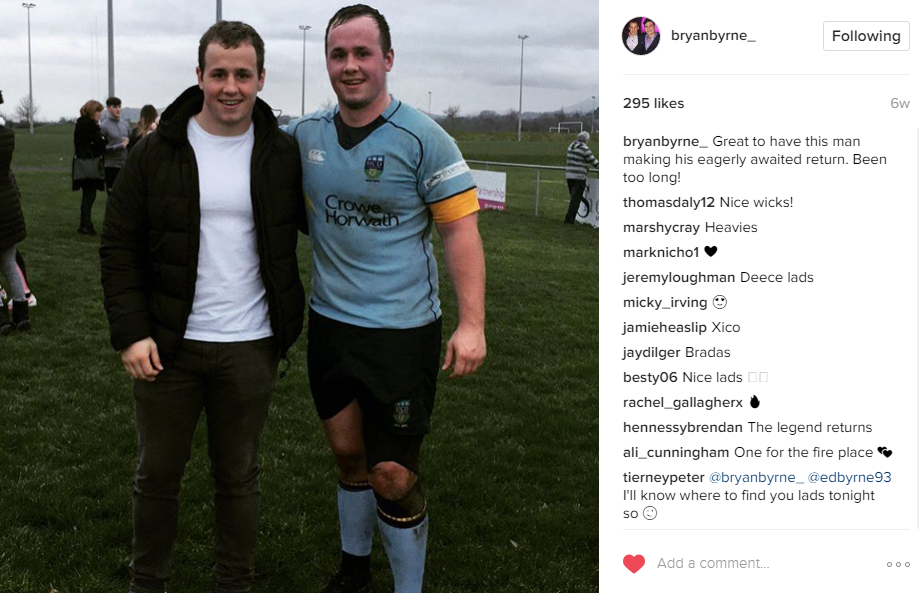 “I can’t speak highly enough of all my family really but Bryan has gone above and beyond. There were bad days and he just knew what was needed. A small gesture sometimes. Nothing major but he could tell that I wasn’t in the best of form. Being honest I couldn’t have done this journey without him. Twenty-seven months is a very long time and I don’t think I could have done it without his support.”

In these very pages Leinster winger Fergus McFadden has referenced Byrne and his return. All the players saw the pain and the dedication and are all celebrating in his return.

“I think it says a lot for the quality of the club actually. How they look after their injured players. That goes for staff, coaches, players, whatever. Sometimes it’s a little pat on the back, a text here and there, going for a coffee. Little things that keep you going.

“Mick Kearney, Jack Conan, Seán O’Brien, Dave Kearney … and not just those lads but they’ve been through the injury mill too lately and they’ve been massively supportive. Being injured is the worst part of being a player but if you have lads around you that can empathise it can make it easier but in Leinster that applies to everyone. They all row in behind you.”

So back in the mix, once the UCD game was out of the way, Byrne didn’t have to wait too long to pull on a Leinster jersey. The British & Irish Cup campaign was coming to a conclusion but that didn’t matter to the 23-year-old prop.

Pulling on a Leinster jersey was a long way off at times.

“I came off the bench in the last two games but it might as well have been a full 80 it felt that good to be back in a Leinster jersey. I had Bryan beside me as well for some of the last game and we got one scrum and a few set-pieces together.

“It’s hard to find the words actually to describe the emotions. But it’s another tick on the list and it’s more progress made. But I’ve a lot yet to do and I’m just looking forward to doing just that.” 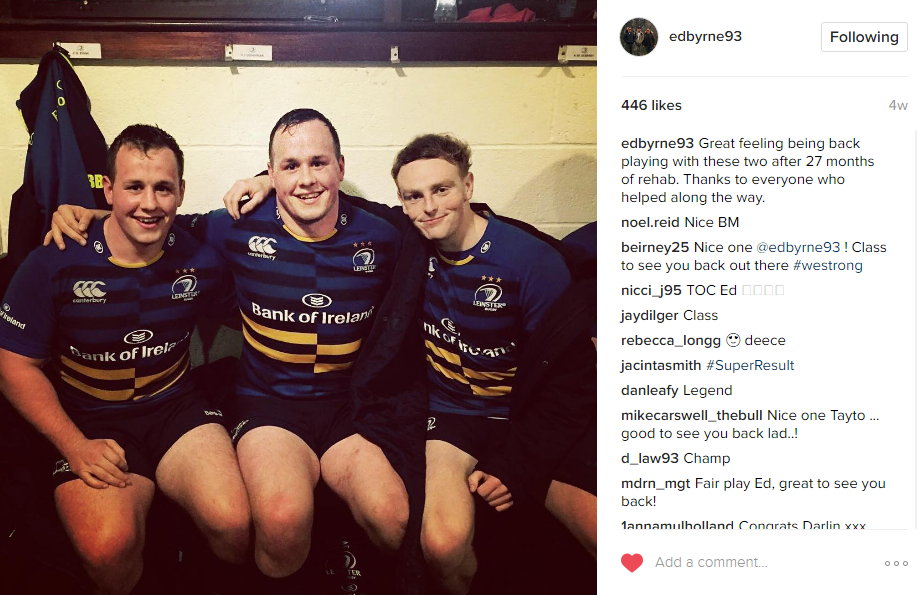 Disappointingly, the Leinster ‘A’ season is at an end now as they failed to qualify from their pool but with that realisation comes the opportunity to kick on and press a case for the next Leinster jersey.

A senior jersey and a game back in the Guinness Pro12.

“I’m under no illusions about where I’m at and the lads have done really well so I can only do my best now in training and put the hand up but I’m back and available for selection and I can’t wait to get in to training next week and start building for Treviso.”

As we catch up, he is still a bit misty-eyed from a few days in New York and a bumpy airplane ride home but the break away gave him time to recharge ahead of a massive few weeks.

“It’s huge for the club. We have to keep driving on and keep the pressure on the Ospreys and on Munster. We can’t afford to slip up in any of the four games to give ourselves the best chance possible of that top-two finish. So we all know what’s ahead but we are all ready for that challenge.”

Back where he belongs. Long may it continue.