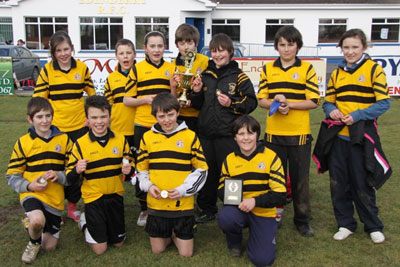 It was a great day had by all with 10 games played by seven teams on the day.

There was a great turn out in support of the children and the atmosphere was one of fun and excitement. Patsy Gorman (Club CCRO) began working with these children in September last and in this group of schools many of the boys and girls had their first encounter with rugby/tag rugby this season, so this was a great stage for them to display their skills.

Once the trophy presentations were completed, the children were treated to some hot food and refreshments in the club house and it was a chance for parents to mingle with club members and discuss the day’s events. The feedback from teachers was very positive and many detailed their appreciation for the Leinster Branch and Edenderry RFC for introducing the TAG rugby programme into local schools. One parent commented how she feels Tag Rugby is very good for both physical and emotional confidence development for her son and daughter who both now play, as the sport is all inclusive.

Special thanks on the day to Referees David Smullen, Emma Coyne and Shane Kelly, thanks also to Grainne Vaugh and Karen Duffy for helping out on the day and to Lanette Glennon for organising all the food and beverages for the teams and supporters on the day.

Edenderry RFC and CCRO Patsy Gorman would like to extend their thanks to all teachers, parents and children for attending the blitz and hope to see you all again soon.