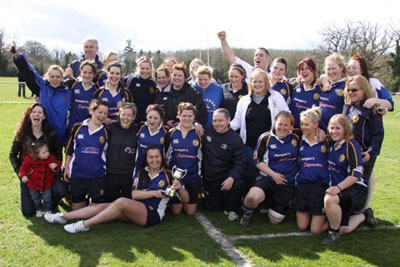 Each club was asked to put forward their top 5 players who had not represented the Province this season. On the night more than 80 potential Leinster players turned up and 16 out of 22 Women’s clubs in Leinster were represented.

Jennie Bagnall, Leinster’s Women’s Development Officer said: “We were delighted with the turnout, a much higher attendance than we anticipated.”

Players were divided into 5 groups and with each group having 2 coaches to guide and assess them. They were put through a series of drills that tested their individual skills, passing, tackling, decision making etc. Finally, to display their individual talents whilst playing as a team, they played two short games.

Leinster’s management team was really pleased with the way the screening went.

About 30 women will progress to the next stage of the screening. They will have one training session a week throughout the summer for eight weeks in the lead up to the Interprovincial competition in August.

When asked if this is the method of assessing players throughout Leinster, Jennie said: “We expect to run these sessions intermittently throughout the season.  It hoped that the Leinster coaches will be able to go out and watch some of the club games during the season.”

Edenderry RFC have kindly offered their facilities for the Leinster Women’s training session that will be taking place every Saturday morning for ten weeks this summer. They have offered use of their new state of the art gym that can facilitate up to 40 players at one time. Edenderry’s Ladies team was set up in 2010 by Gillian Hoey and Karen Duffy. They made their Leinster League debut last season (2010/11).

Trained under the guidance of Head Coach Patsy Gorman and forwards coach Darren Hanlon, their game developed from strength to strength as the season progressed.

They ended their debut season on a high after winning Leinster Division 4 Phase 2, in which they won five matches and only lost one. They were also finalists in the Leinster Womens Plate, losing 10-0 to Clondalkin in the final. They have gained promotion to Leinster Division 3 this year.