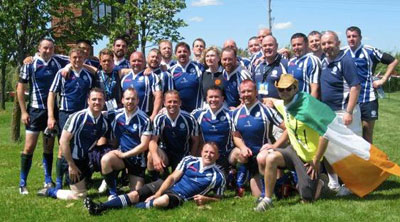 The Union Cup is a biennial European, non-professional, gay rugby union tournament, first inaugurated in Montpellier in 2005. The tournament has since been hosted in Copenhagen and London, in which the club participated.

Over two days, the Warriors, along with 16 other European rugby teams, will participate in the tournament hosted by the Amsterdam Lowlanders RFC at the Amstelveense Rugby Club 1890 “ARC 1890” grounds. For the duration of the tournament, Tourism Ireland Netherlands will proudly sponsor the club.

The Emerald Warriors was established in August 2003 to provide members of the LGBT and the wider community with an opportunity to play competitive rugby in Dublin. The club entered the Leinster Metro Junior League in 2007 and currently plays in the J4 league.

In 2007, the club won the sevens champions at the Copenhagen Union Cup and in 2010 at the Bingham Cup tournament, hosted in Minneapolis, they won the Shield.

Over EWRFC players, members and supporters will travel to Amsterdam for this year’s event, which promises to be a feast of rugby amongst their peers from throughout Europe. Not only do the club hope to repeat their successes in Copenhagen and Minneapolis, they are also raising the club’s profile and their community through the great sport of rugby.