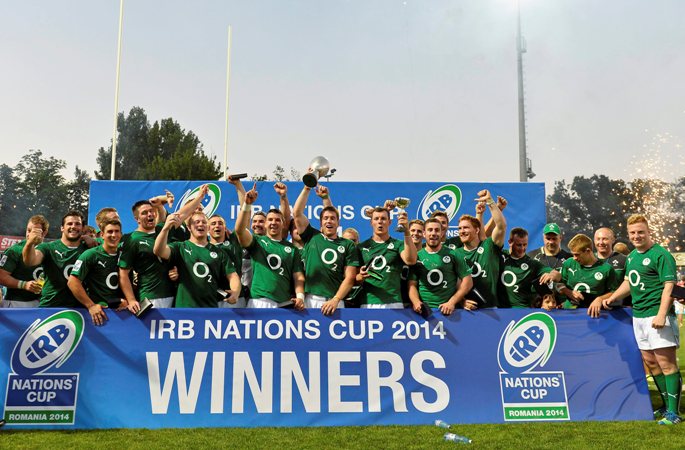 Emerging Ireland won the Nations Cup after defeating Romania in their final game of the tournament.

It was a third straight bonus point victory for Dan McFarland’s men as they ran out deserving winners of the annual IRB tournament.

Captain Dominic Ryan (28 minutes) and Craig Gilroy (31) crossed for first half tries and Robin Copeland touched down just after the break, with a last-minute penalty try completing the scoring.

Emerging Ireland tallied up 21 tries during their three-match run and the only one they conceded came in the 78th minute when the Romanians forced a penalty try for a collapsed maul.

This was the most hard-earned of the Irish side’s wins in Romania and the Lynn Howells-coached Oaks – aggressive and physical throughout – emerged with a good deal of credit from the game.

Ian Keatley, who resumed his senior-capped half-back partnership with Paul Marshall, was prominent right from the off, breaking through on the left to pass for Andrew Conway who fumbled with the try-line at his mercy.

A Romania ruck infringement allowed Keatley to kick the visitors into a third minute lead, however a penalty-winning scrum gave Lorin Vlaicu the opportunity to lob over a lovely drop goal in response.

Both kickers missed kickable penalties on the quarter hour, while Conway was denied by a forward pass as Emerging Ireland again looked to put the Munster winger into space.

Gilroy also threatened on the opposite wing, doing well to gather a Marshall chip on the run, but the Romanians were making life difficult for McFarland’s side, particularly at the breakdown and in the scrum.

Nonetheless, Emerging Ireland upped the tempo approaching the half hour mark and ran in two converted tries in the space of four minutes to really take control of proceedings.

Hooker James Tracy did well to retrieve possession on the deck in the Romania 22 and with momentum built from a couple of close-in rucks, Marshall fed flanker Ryan to crash over just to the right of the posts.

Tracy was also involved in the build-up to the second Irish touchdown, carrying strongly in midfield after a quick tap from Marshall. The ball was moved wide where crisp passing from Keatley and Eoin Griffin released Gilroy who broke a Vlaicu’s weak tackle to score in the right corner.

Keatley added the extras to both scores but the defending champions pressed for a try of their own before half-time, getting some good continuity going in the Irish 22.

Referee Ian Davies sin-binned Johne Murphy for a ruck offence during that spell, but David Foley stole the resulting lineout near the Irish line. Indeed, 14-man Emerging Ireland almost ended the half with a try, with Griffin slicing through before Keatley’s short pass to the onrushing Copeland was ruled forward.

Number 8 Copeland, who has been a blockbusting runner throughout the tournament, got the try he wanted just seconds after the restart. Billy Holland charged down a Romania kick, the turnover allowing Copeland to race away from 40 metres out and he beat Gabriel Conache, the last defender, to run in another seven-pointer.

The second period was listless at time with Emerging Ireland, whose own defensive workload increased, unable to make the most of Conache’s sin-binning for a shoulder-led tackle on Gilroy in the 50th minute.

Replacement hooker Bryan Byrne put himself in an excellent position to hold up Florin Surugiu and prevent a certain try in the 61st minute.

Holland and John Ryan typified the work-rate of the Irish pack after lock Foley was yellow carded. Winger Murphy joined the scrum and Dominic Ryan moved across to the second row as they held the beefy Romanian scrum at bay.

Emerging Ireland’s scramble defence got them out of some tough situations until the 78th minute when they dragged down an advancing Romanian maul and referee Davies reacted by awarding a penalty try which Vlaicu converted.

There was still time for Emerging Ireland to have the final say, Marshall and replacements Tommy O’Donnell and JJ Hanrahan initiating a free-flowing break up the left wing and a no-arms tackle on Conway – just as he was poised to dot down in the corner – resulted in a penalty try.