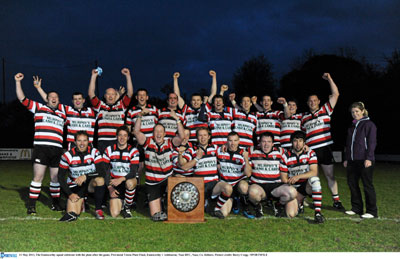 Enniscorthy lead 14-12 at half time with a pair of tries from impressive full back Richard Dunne and centre Shane O’Sullivan that out half Ivan Poole converted while fly half Paul Morris kicked a quartet of penalty goals for Ashbourne.

The lead changed hands three times in the second half before Barbour sprinted clear down the left wing to dot down for the decisive score.

Ashbourne scrum half Gavin Kennedy had nudged his side ahead with a drop goal shortly after the resumption before Poole and Morris exchanged penalty goals to leave the county Meath club leading going into the final quarter.

For long periods of the second half it looked as if Ashbourne were going to prevail but the Slaneysiders were given that late boost and they controlled affairs to the final whistle to add the Towns Plate to their promotion to the Leinster league Division 1A achieved earlier in the season.