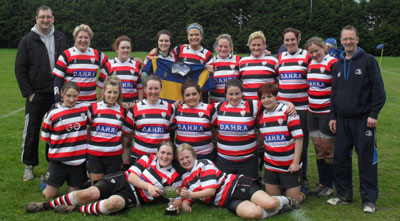 The Cup was played for in memory of Wexford player Billy Whelan who died last year. Billy is the brother of Aine Whelan, who is heavily involved in Wexford’s Women’s, Girls and Minis Rugby.

Due to a shortage in players, Enniscorthy and Rathdrum combined resources to play the Vixens in what turned out to be a pulsating game of rugby. “Drumiscorthy” as they were quickly called, started the match the brightest and were quickly threatening the Wexford line. Their dominance of the first third was rewarded when they scored the opening score of the game. A series of phases eventually saw Jessica Sayer make a break on the right hand side. She offloaded in the tackle to Brid McGrath who managed to hold off the Wexford defenders to touch down in the corner.

The combined team continued to pile on the pressure with a good mix of open rugby. Wexford were caught offside following a quickly taken tap and go penalty. From the resulting penalty, Edwina Sayer slotted over the kick to put Enniscorthy/Rathdrum 8 – 0 up. However a determined Wexford Vixens were not done. Fighting back, they kept the ball in the back and eventually managed to create the space in the corner to get over the line to score a tight try. With the momentum with them, they continued to dominate the 2nd third with their forwards retaining possession well. They took the lead after another sustained period of forward power. This only served to reawaken the combined “Drumiscorthy” team.

A well taken lineout by the combined team on the half way line was fed to inside centre Sara Nolan who put in a perfectly placed kick over the Wexford defence. The ball bounced kindly for the chasing back led by Amy O’ Neill. Her surging run was then followed by a perfect offload to winger Jessica Rowden who touched down for a wonderfully executed try. Sayer slotted over the conversion and the combined team no lead 15 – 10.

The final third was a nail biting period. Enniscorthy/Rathdrum at times played some scintillating open rugby. Under her own post, Brid McGrath showed to kick but sublimely dummied to run the ball, before feeding Amy O’ Neill. The ball was recycled quickly and great passing almost got its reward when McGrath was pushed into touch agonizingly close to the Wexford line. The last 5 minutes of the match saw Wexford camped on the Enniscorthy/Rathdrum try line. However the “Drumiscorthy” forwards were nothing short of heroic as they bravely defended everything that Wexford through at them putting bodies on the line. Wexford almost scored at the death but the ball was dramatically help up preventing a certain try.

The final whistle saw jubilation as players from the combined team tasted success for the first time this year. Great credit is due to players from both sides who managed to form a winning team and play together for the first time. Thanks are also due to Wexford Wanderers and the Whelan family for a great day’s rugby.