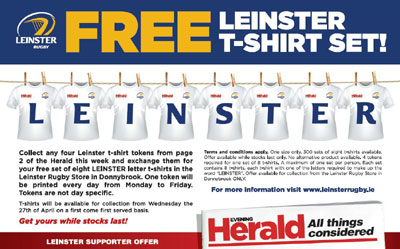 This is the second time this season that the Evening Herald has worked with supporters to bring them a great Leinster offer demonstrating the Herald’s continued commitment to Leinster Rugby.

In January, Leinster supporters helped us to create the 2011 Leinster Rugby Calendar which was distributed for free in the Evening Herald.

Next week the Evening Herald will invite readers to collect tokens in the paper that can be exchanged for a free set of 8 Leinster t-shirts. Each t-shirt has a different letter on it so that when a group of people stand side by side wearing the whole set, they would spell out the word “LEINSTER”.

Supporters can collect the tokens from Monday, 25th – Friday, 29th April. Readers can collect any four tokens and exchange them for their set of t-shirts while stocks last.

T-shirts can be collected from the Leinster Rugby Store in Donnybrook from next Wednesday (April 26th) upon presentation of 4 Herald tokens.

There are a total of 300 sets of t-shirts up for grabs.