Father and Son combos in Clondalkin… 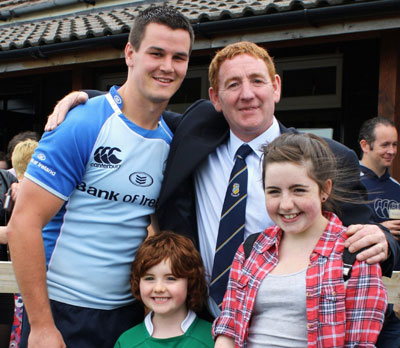 ‘Honour thy Father and Mother’ is a commandment regularly preached from the pulpit on a Sunday morning, but Church is not the only place you will hear the biblical commandment…

Listen to and obey your Father are also instructions regularly heard at Gordon Park on the Sabbath as number of Clon’ men become coach as well as father to their sons and daughters.

Clondalkin have father and son manager and player combinations in every age group from Under-8 right up to the first team were coach Kenny O’Brien still grounds his adult son Alan for a knock on-offence. In a true display of the family nature of Leinster rugby’s fastest growing club there are no fewer than 23 fathers involved in coaching their siblings.

And Vice-President and under age co-ordinator Barney Bracken believes it is a massive achievement for the Dublin 22 club.

“We have always had fathers coaching son’s up here. It is just the nature of Clondalkin Rugby club,” Bracken told CRTV. “But we have more than ever now and its great. We have over 20 parents involved directly in coaching sons and daughters. The likes former first team coach Rob Hayes working with his son Nathan at under-17 as well as Shane Dunne and son Josh. Fourth team stalwart Frank Lynam works with his sons Louis and Samuel at Under-8s.

“Winston Jebb, who eldest sons are now playing first team rugby, works with his son Karl and under-19s. Second team coach Finbarr Butler also puts in a shift at underage level with his kids as does Tom Duffy amongst others. There are also a lot of parents that come up and help in anyway they can. That is also appreciated and we hope the trend continues and maybe we will have grand dads coaching grandsons very soon.”
?