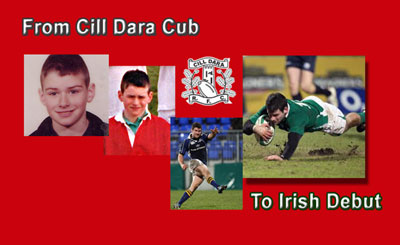 There will be wonderful excitement in Cill Dara Rugby Club on Saturday afternoon when Fergus McFadden becomes the first ever player to gain a senior Ireland cap having started his playing career at the Kildare Town club….

At a little before 2.30pm he will take to the field in Stadio Flaminio in Rome to win his first Senior cap, an honour that is richly deserved as the Suncroft man has been in the form of his life for Leinster this season.

Fergus started playing mini rugby for Cill Dara in the mid-90’s before honing his skills on the playing fields of Clongowes Wood College SJ and then on to Leinster via UCD and his current club Old Belvedere.

He did play for Ireland last season against the Barbarians in Thomond Park, along with another former Cill Dara Minis player, Johne Murphy, but unfortunately no caps were awarded for that game.

It is great honour for a club like Cill Dara to have these two marquee players playing at the highest levels with both Leinster and Munster and it is also a great inspiration to the many young players playing for Cill Dara RFC today.

Congratulations to Fergus, his family and friends on this great achievement and hopefully this will be the first of many caps for the young man from Suncroft on the edge of the Curragh.