First blitz of the year in Malahide Primary… 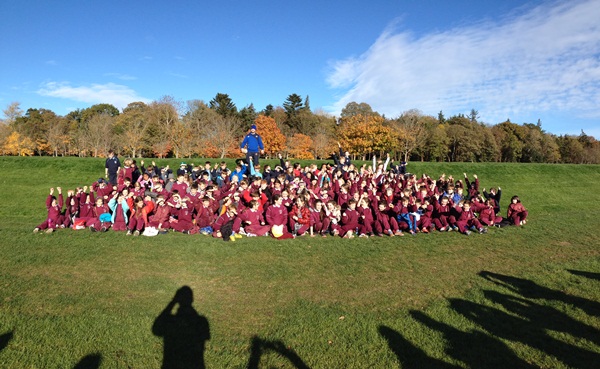 An event originally scheduled before Haloween but postponed due to bad weather was now all set for Friday morning the 8th November.

The students from St. Andrews National School and Oliver Plunketts National School had taken part in Leinster rugby’s Play Rugby Programme for 6 weeks up to Haloween. In this programme the students learnt skills to which they would be able to implement on the day of the tag rugby blitz. The 4th class pupils from both schools were eager and excited leading uo to the blitz and it was due to be an enjoyable morning for all involved.

The morning of the blitz was a cold but beautiful morning and as the schools arrived down to Malahide Castle the students couldn’t wait to get started. The two teams from St. Andrews and eight teams from Oliver Plunketts’s were not only looking forward to playing the other school but also against the other classes in their year for, no doubt for the school bragging rights. The games were hammered out with some excellent displays of tag rugby and try scoring skills and by one o’clock the blitz was over and the teachers brought their tired but happy students back to school.

A big thank you has to go to the volunteers from Malahide RFC who helped with refereeing and organisation on the day, the teachers and principals of both schools for their help throughout the tag rugby module and Fingal County Council for the use of the castle grounds.

Malahide CCRO Brendan Carpenter added “ Having worked with the students from both schools over the last 6 weeks, to see them finally out playing tag rugby against one another and enjoying so much was very rewarding for the Play Rugby Programme. Hopefully the children follow on their rugby introduction and come through the ranks of Malahide RFC and we see them still playing rugby in the future. A special thanks to the few volunteers from Malahide RFC who assisted me on the day making the blitz run very smoothly.”

If any other schools, colleges or community groups in the Malahide/Swords would like to participate in a similar programme please contact Brendan Carpenter on 0872109481 or email MalahideCCRO@leinsterrugby.ie.