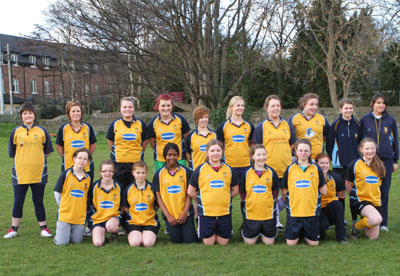 The young Clonettes, who have been training under the guidance of Catherine Keane since last September, made history when they took to the field against Blackrock in front of delighted senior Clondalkin players, committee members and parents.

It is another massive milestone for the Dublin side and follows on from the success of the Senior ladies side, who have made the Leinster final in just their second year together.

Blackrock may have won both ties, but Clondalkin performed admirably and were celebrating regardless as they welcomed another team to the expanding Gordon Park family.

“The girls have been training up here since September and they have been great to have around the club. We are as proud as punch and delighted to welcome to them Clondalkin family,” Vice President and Dublin Community Games champion tag coach Barney Bracken told CRTV.

“Jessie ‘The Hips’ Stapleton also lit up the place with an amazing effort but all the girls were great. The club would like to commend Catherine Keane on the stellar work she has done with the girls. For the moment it is just tag but it may develop on.

“We would also like to extend a welcome to anyone interested in joining training is Monday and Wednesdays and to thank the local schools and the Leinster Branch for their support.”