Fitzgerald goes back to where it all began in DLSP… 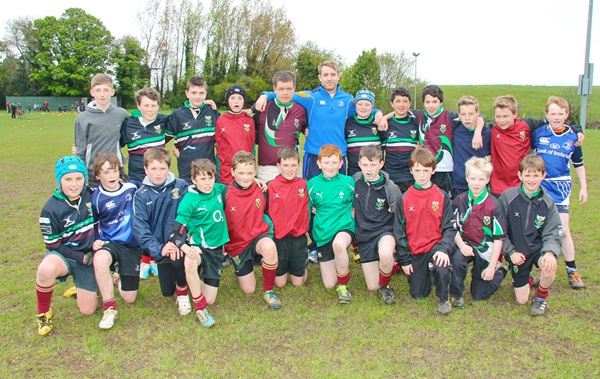 With 43 children in the panel, the team is one of the largest in the metro area at this grade and this season fielded two sides in their league.

The team had been told that a very special guest would be attending their Sunday morning training session, but the players had no idea of the guest’s identity until he arrived that morning. His arrival created a huge stir around the club.

On his way to the area the Under-13’s trained in, Luke was stopped by loads of children on various teams who couldn’t believe their eyes, with who was visiting their club. Luke very kindly posed for photographs and autographs with everyone who approached him.

With the Under-13’s he gave the enthralled players, some excellent tips on how important good nutrition and diet is, he also stressed the importance of always working on the basics of your game was at all times, along with listening to your coaches.

Luke is no stranger to the club, his own rugby career began as a youngster on Sunday morning’s at De La Salle Palmerston‘s mini-rugby section and ever since his career has been followed with great pride by those who played with and trained him. With a Lions jersey signed by him taking pride of place in the players bar.

After he had left, all the talk was about his pleasant disposition by everyone who met him. During his visit he truly was a great ambassador for Leinster Rugby in the manner in which he made time for everyone and nothing was a problem.

Rest assured, following this visit he now has a new generation of young fans who want to follow in his footsteps from wearing the Salmo jersey on a Sunday morning to hopefully playing for Leinster!