Fitzpatrick gears up for second term in Clondalkin… 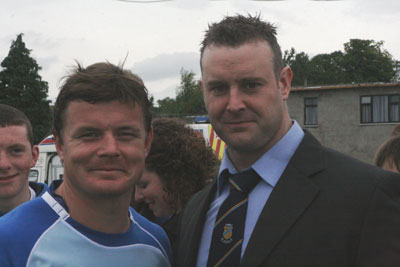 ‘Big’ Dan Fitzpatrick has become the first ever Clondalkin club captain to take the reigns for consecutive seasons.

The big lock feels he has unfinished Division 2 business and is adamant the Gordon Park side’s divisional stock will rise under his tenure this time round. Fitzpatrick aims to ensure Clondalkin will be playing in Division 1 this time next year.

After breaking a host of records last term including the world tackle record achieved by the underage stars, a record number of teams fielded and a record number of trophies won amongst others, making history seems a fitting way to start the 2010/11 season.

Being the first man in the club’s 33 year history to captain the club for successive years, however, isn’t the only record Fitzpatrick plans to smash this season.

“Captaining this great club is privilege to be the first man to do it for a second year is a massive honour. We made huge strides on and off the park last year. We had a massive amount to celebrate but not getting promotion rankled with me over the summer so I put myself forward for the captaincy again.

“I am delighted to get have got it and I am delighted to have the support of the club and our first team sponsors Bolands of Clondalkin again. Next season will start by making history again when we will play our first ever Leinster League Division 1 game. We are stepping things up a gear this year and we are aiming for promotion.”