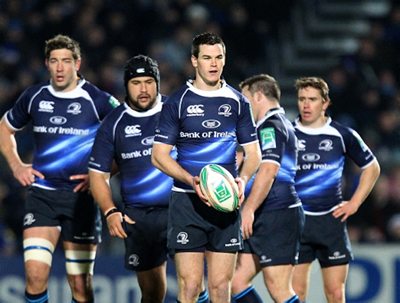 Fellow Irish province Munster, who won the title in 2006 and 2008, will be third up on Saturday afternoon when they host the 2000 champions Northampton Saints in a re-match of their recent Round 6 Pool match in Limerick.

The first of the two quarter-finals on French soil will launch the Saturday sequence of matches when Biarritz Olympique entertain the Ospreys. The Pool 2 winners will be taking their fixture across the border into Spain, to play at the 32,000 Estadio Anoeta in San Sebastian. It will be the fourth knock-out match Biarritz have played at the venue and their sixth game overall.

As well as beating Munster and Sale Sharks in the last eight in Spain, they also defeated Bath there in the semi-finals in 2006. Their only Heineken Cup defeat in San Sebastian came in 2007 when Northampton Saints pipped them 7-6 in the quarter-finals.

Three times champions Toulouse, who meet Stade Francais Paris in an all-French affair on Sunday, 11 April, have also agreed to switch their game to a bigger stadium. They have already beaten Sale Sharks and Cardiff Blues at Toulouse’s 37,000 Stade Municipal this season.