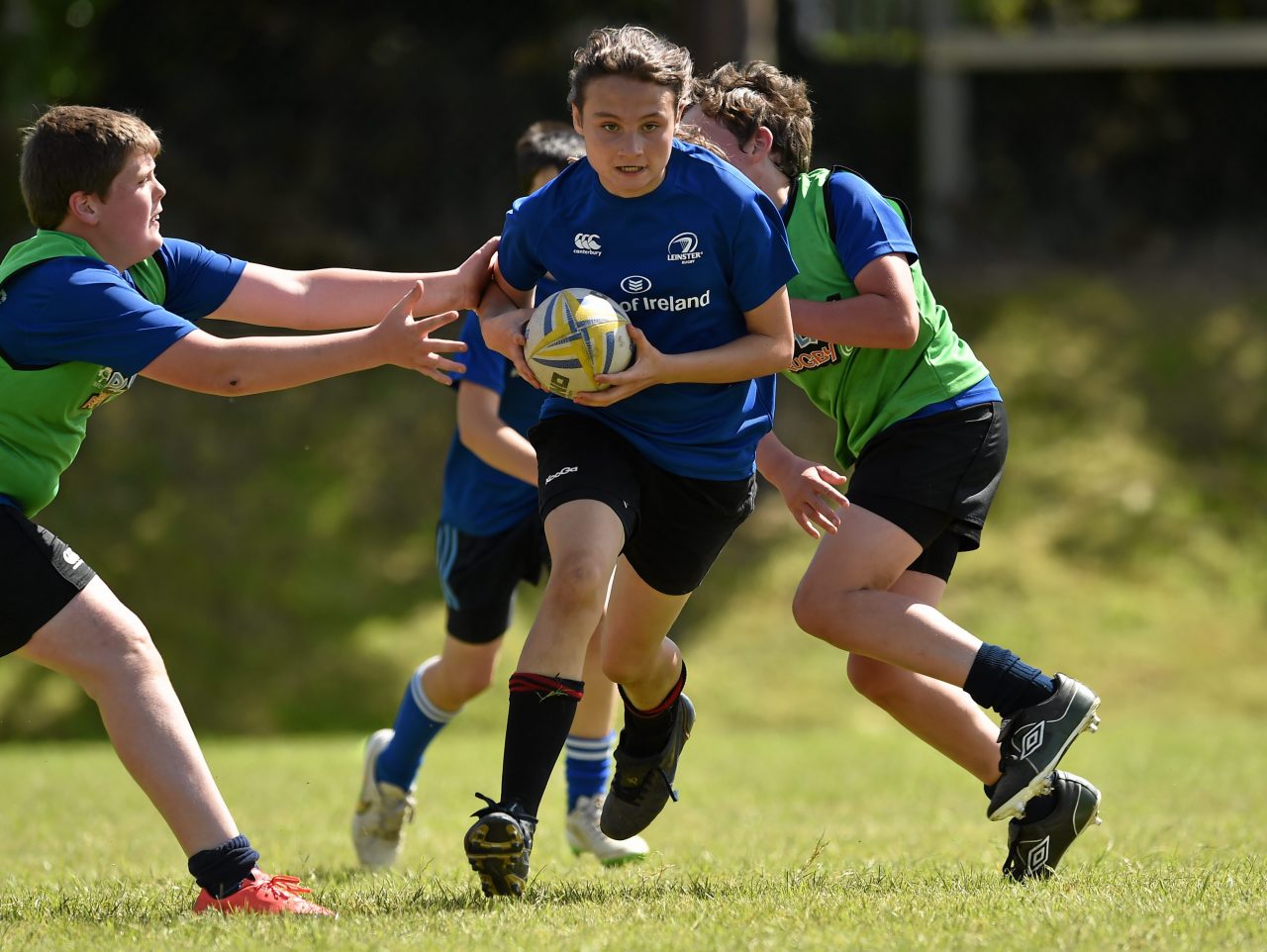 With thousands of kids playing rugby in 78 clubs and 155 affiliated schools in the province the pipeline of talent has never been stronger in Leinster.

So with a new rugby season kicking off across the province over the coming weeks and with kids flocking in their droves to the clubs in question – just what does it take to make it from playing minis rugby to the Leinster Rugby senior squad?

This is Leinster Rugby’s Development Pathway. Through a system of carefully designed player development pathways, talent is identified and encouraged so that the stars of the future can achieve their potential while continuing to play with their own club or school team.

It is the road less travelled, but for the few that make it there is no greater feeling than progressing from the ground up. 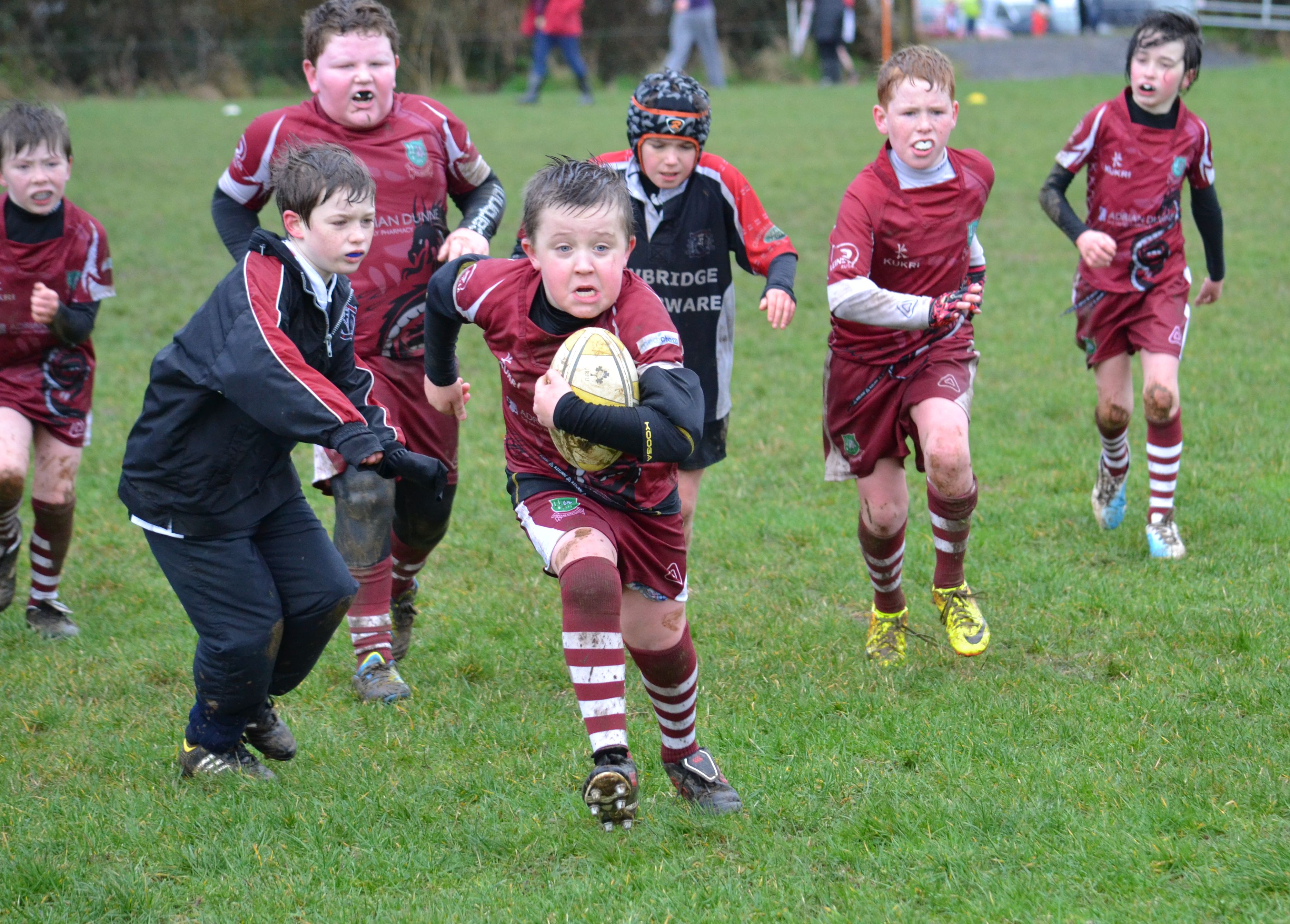 Daragh Jewell plays with Portarlington RFC’s under-12s team. He is a huge Leinster Rugby fan and he
dreams of one day being a Leinster player. He hopes to get a flavour of what that might be like when his team plays in a half-time game in the RDS later this year.

Daragh’s favourite player is Sean O’Brien and just like Daragh, Sean was once a minis player in a provincial club. By working hard with his coaches in Tullow and participating in the player development programme he managed to achieve his dreams. Daragh could not have a better role model. 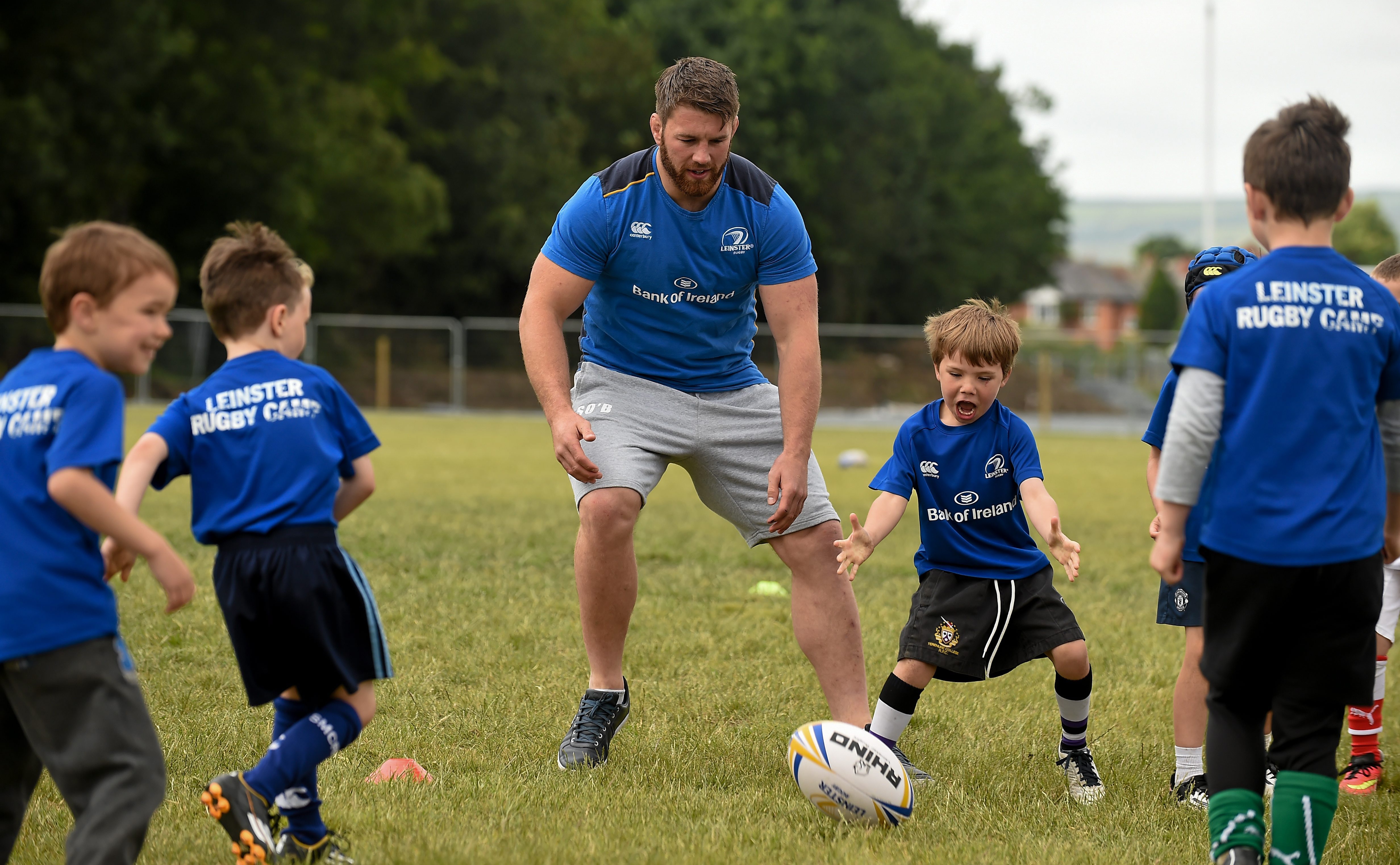 Up until under 15s players will have developed their basic skills within their club with the help of volunteer coaches who regularly work with the Leinster Rugby Coach Development Officers to ensure that they get the most out of their training sessions.

However, at under 15s players will finally have an opportunity to attend screening sessions in their area where players with the ability and potential to move to the next level are identified. One such player is Darragh Bolger a prop playing with Clontarf FC.

Darragh took up rugby when he was 10 years of age and attended the Metropolitan Area player screening that took place in Wanderers FC.  He says that he was nervous at the time as there were so many good players from every club in the area but he was selected for the summer training programme and then represented the Metropolitan Area in The Shane Horgan Cup.

This is a competition that provides competitive games for the under 16 development squads in all five areas (Metro, South East North East, Midlands and North Midlands). During that year Darragh worked with Dan Van Zyl and other Leinster coaches and he says that the experience of training at this higher level and with talented players drove him to improve every area of his game. 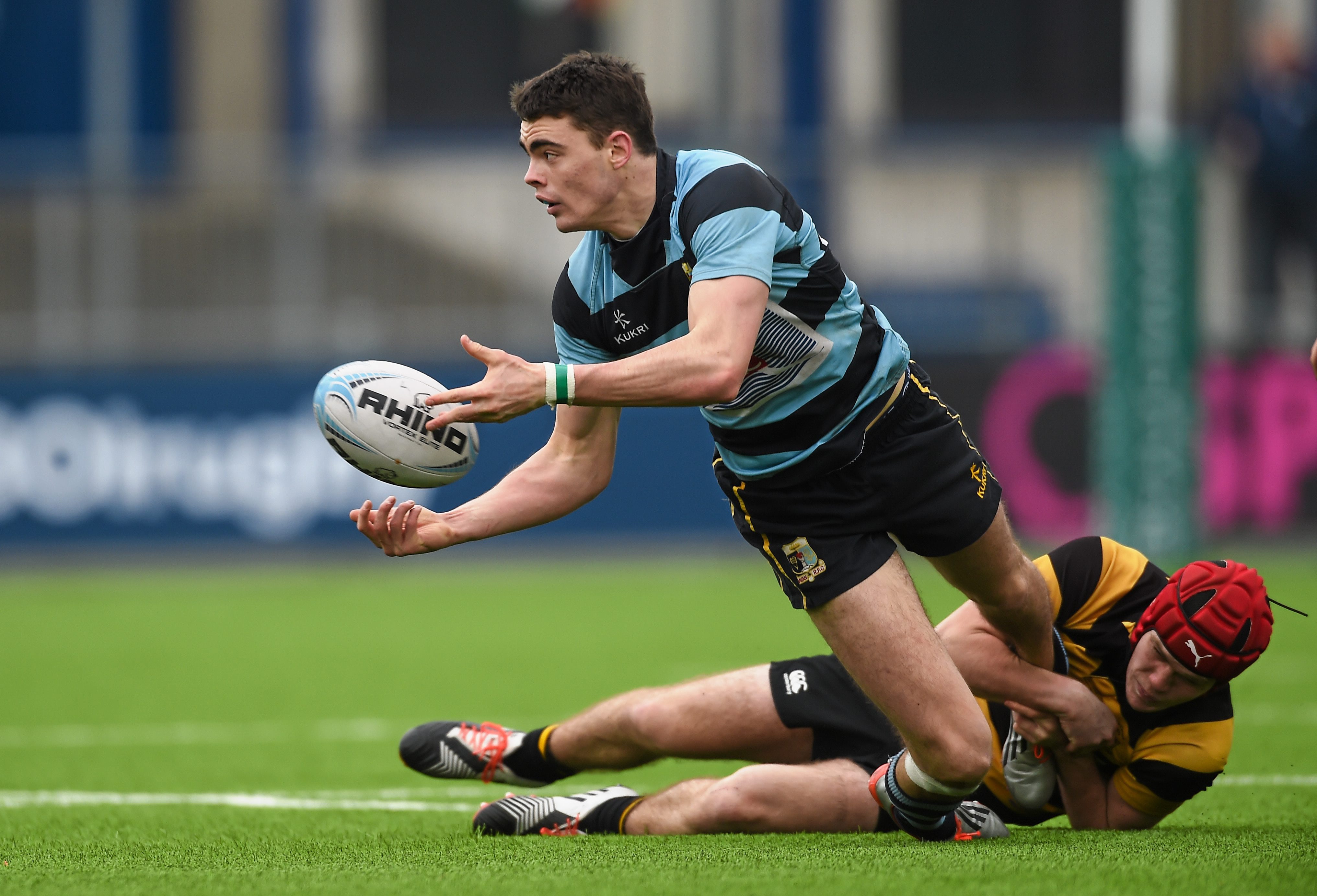 Ruadhán McDonnell from Longford RFC was selected for the under 17 Development Squad following an outstanding season with his club and the Midlands Area squad. Ruadhán loves playing for Longford and says that every year since beginning youth’s rugby has brought new challenges that his coaches have helped himself and his team mates to meet head on.

Following a summer of intensive training Ruadhán was selected for the under 17s Talent Identified Squad as was Conor Nash from Navan RFC.

At this stage of the programme players train at one of three centres around the province as they work to bring their skills to the next level. This is the stage where Leinster Youths players are identified and Conor has had the privilege of achieving that distinction.

He still remembers the first stage and the day that he attended the North East Area screening and says that although it seemed like a small stepping stone at the time when he looks back he realises that it was a huge moment in his life.

Conor says that while his coaches in Navan were outstanding, everything that he did with Leinster was at another level as he works within a squad that ultimately has the same ambitions as he does.

He travelled with the under 18s squad to play games in England and he also played for the Ireland under 18s against Italy in Ashbourne. His main focus for the coming season centres around his club where he hopes to play at full back for their under 20s team as he believes that the physicality of under 20s rugby will help him to progress and hopefully secure a place with Leinster in the under 18 Clubs Interprovincial Series squad. 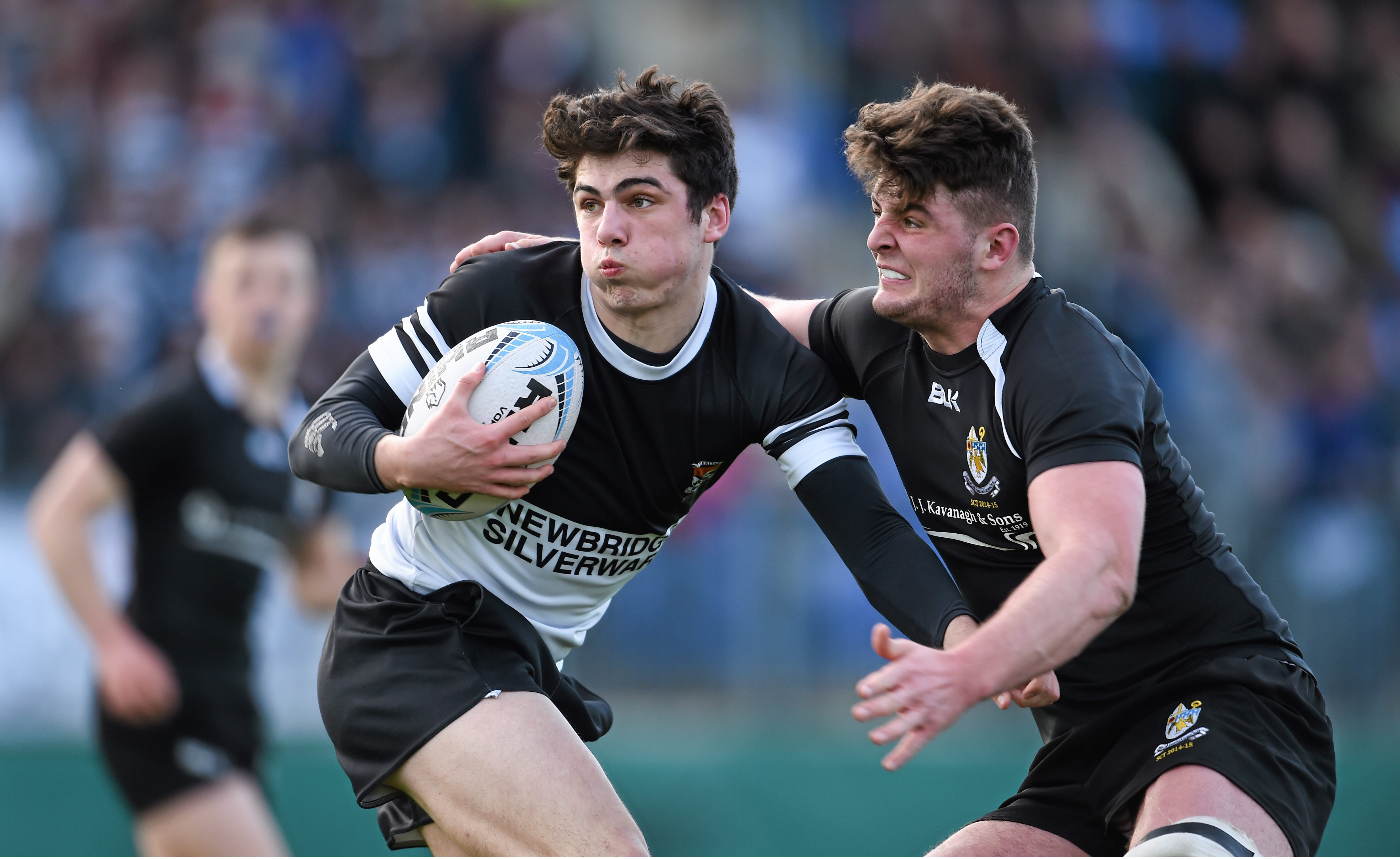 The School of Hard Knocks

For schools players the system is slightly different. From day one they are working towards the Bank of Ireland Leinster Schools Junior and Senior competitions by playing competitive games against other schools on a regular basis.

Players who perform well at Junior level will then be invited to participate in an under 17s Summer Programme which will be their first experience of working with the Leinster Player Development coaches.

Jack Dunne from St. Michael’s College in Dublin was one of the players selected for the Summer Programme in 2014. Jack started playing tip rugby at the age of five in Stradbrook and later joined Seapoint RC but he says that when he started in St. Michael’s everything was stepped up. He says that the summer programme was another step up as the sessions were intense and he found himself training with the best players from other schools. 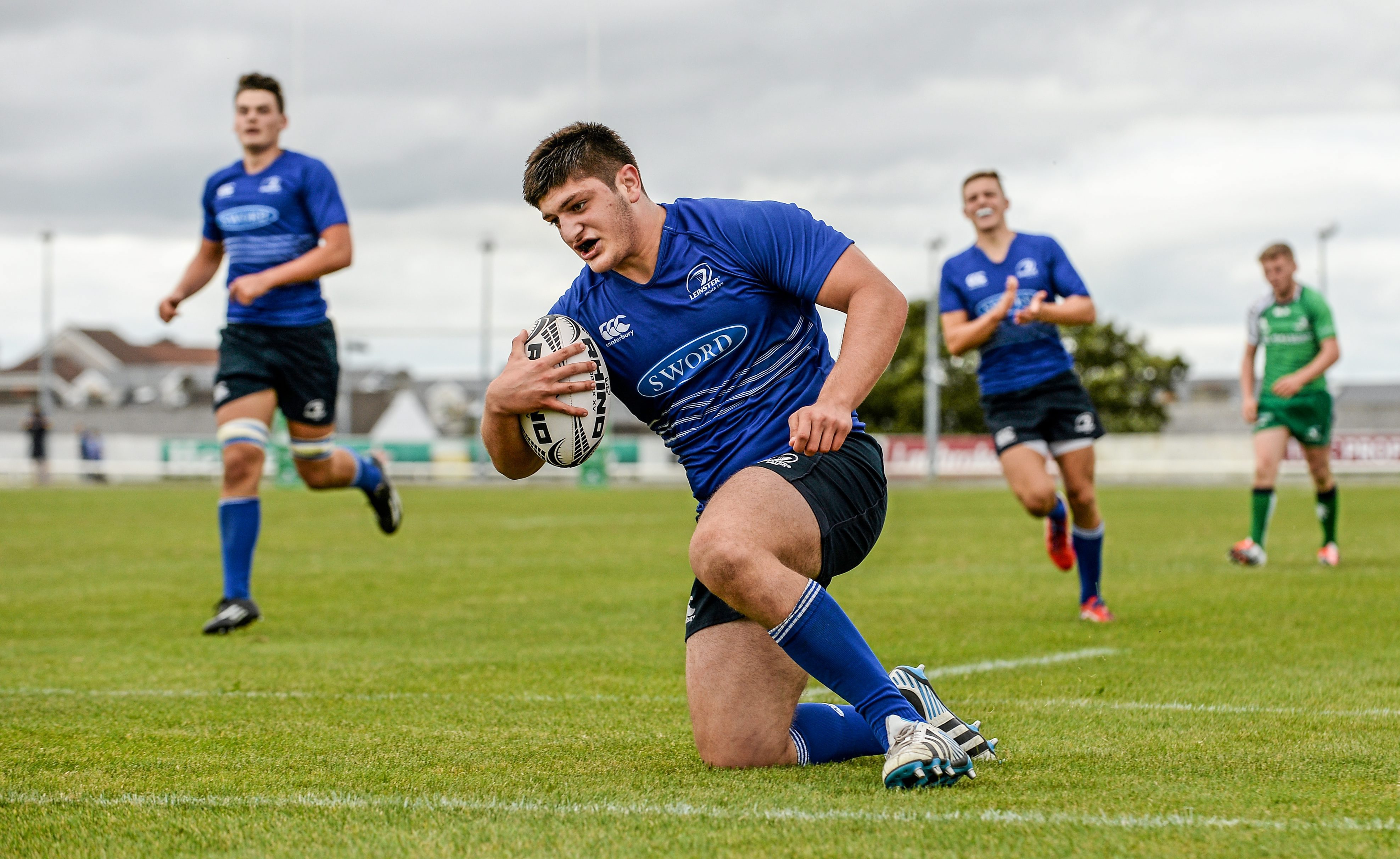 The step from under 18s to under 19s is a huge one as the club and schools players who progress are combined into one squad. Vakh Adbaladze has just completed a season at this level and while balancing the rugby with studying business in DCU was tough he has enjoyed every minute.

Vakh, whose father played rugby in Georgia before moving to Ireland, joined Coolmine RFC when he was 12. Now with Clontarf, he more than most benefitted from the intensive coaching that he received in the development programme as he had to learn new skills when the coaches identified that he had the potential to be a really dynamic prop.

Jimmy O’Brien from Newbridge College also made the under-19 combined squad this season. Jimmy is an accomplished out half and centre who has progressed steadily through the schools system. He was selected to represent both Leinster and Ireland at under-18 Schools level but also found that the step up to under-19 brought new challenges as players had to compete for places with the club players. 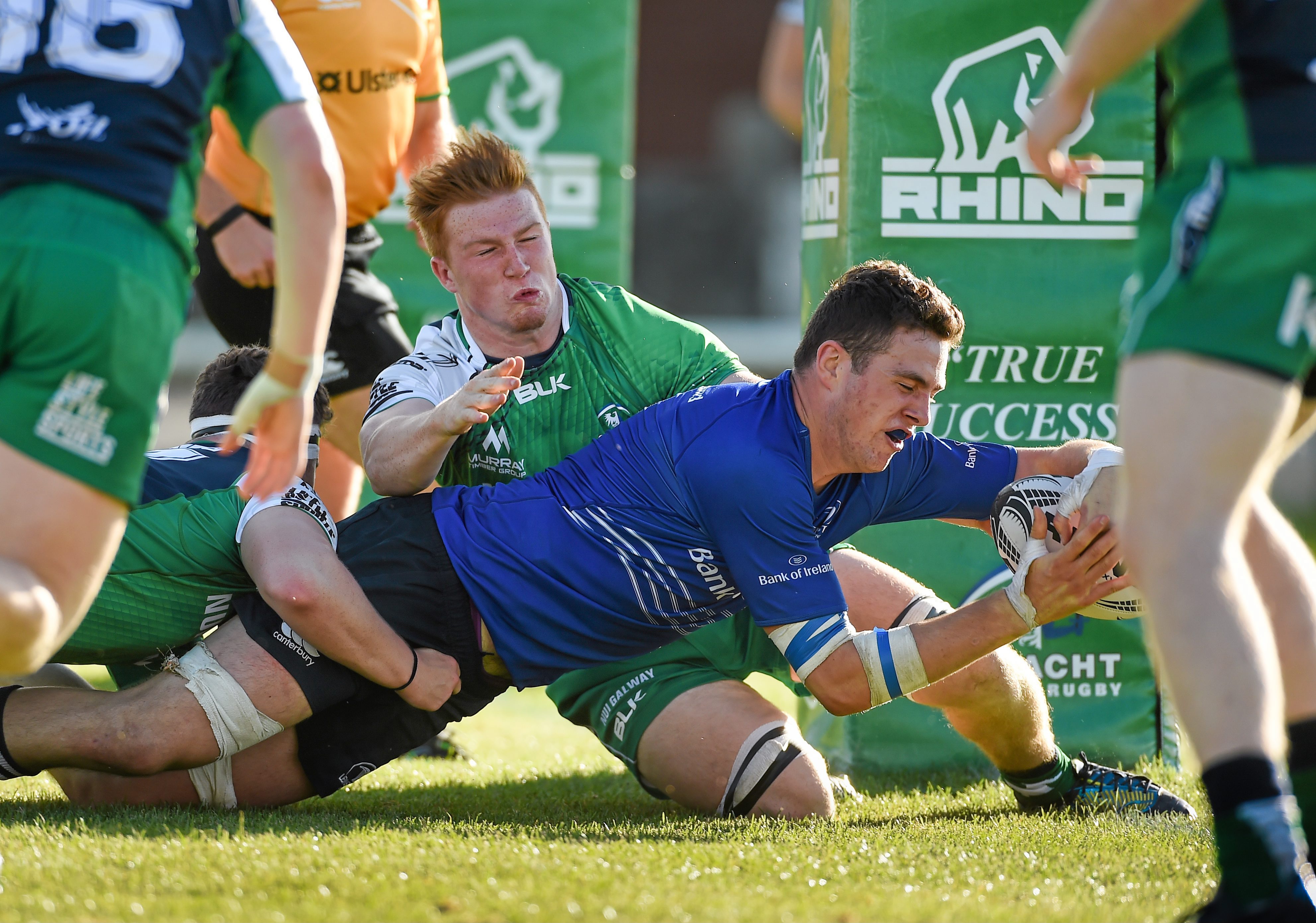 For many a Leinster fan, Donnybrook is still the spiritual home of Leinster Rugby but in a little corner of this old ground, the Leinster Sub-Academy are working away under the watchful eye of Dave Fagan and Cillian Riordan.

The Sub-Academy is the final underage stage for players and the gateway to the full Leinster Academy.

Josh Murphy who started playing with Enniscorthy RFC when he was eight years old and then moved to Dublin where he went to school in St Michael’s, has worked hard at every stage from Junior Cup in school through the Leinster youths teams and he even managed to pick up a Senior Cup medal with St. Michaels in 2012.

His year in the Sub-Academy required plenty of dedication. As well as Leinster and UCD pitch sessions he attended early morning strength and conditioning work outs in Donnybrook early in the morning while most were still in bed. This work is done before he heads to lectures in UCD.

Naturally not everyone can make that leap and there are only so many positions available however the Leinster Pathway also has a remarkable record in facilitating the movement of players into other environments.

Cormac Brennan from Cistercian College in Roscrea is one such example. Cormac had played rugby with Galwegians RFC from the age of ten before starting in CCR. Despite being selected in Schools Development squads, Leinster under 18s and 20s and indeed with Ireland, he was not offered a Sub-Academy contract.

However he is very grateful to Girvan Dempsey who helped him to secure a place in Connacht’s Academy. Cormac is hugely excited by the prospects of working in the Connacht environment and who knows maybe even playing with their senior team. 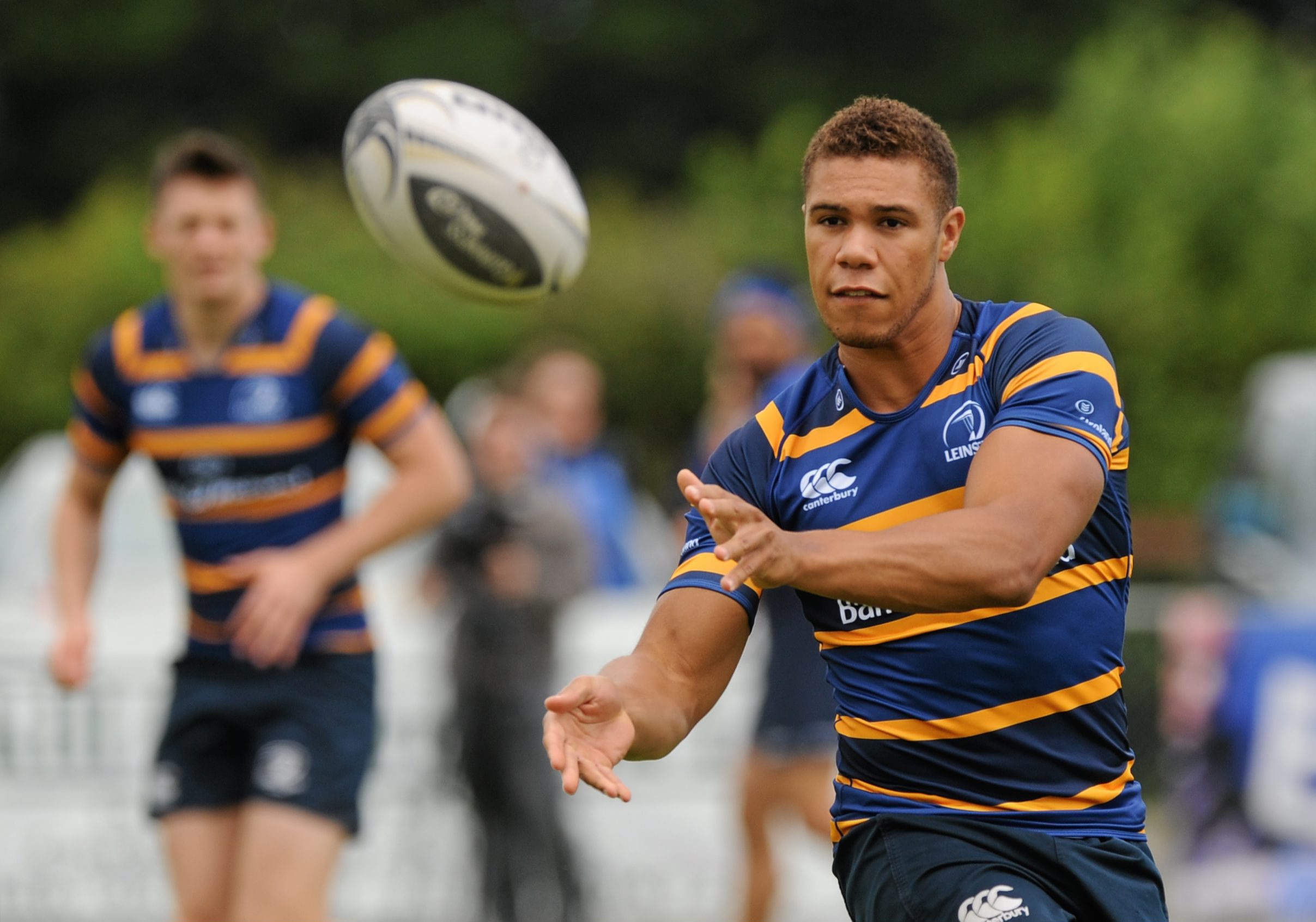 Reaching the Academy is the ultimate goal of every player working within the Leinster Rugby Development Pathway.

Once they reach this level they move from their base in Donnybrook up to UCD and train on a daily basis with the Senior team, where they can learn from some of the best players in the world in their position.

Academy player Adam Byrne scored a memorable try last Friday night against Ulster in the Kingspan Stadium and his promotion to the Academy became a reality when he graduated from the under 20s two years ago.

Adam didn’t start playing rugby until he was 15 when a friend of his suggested that he give it a go in Naas CBS. Adam was a great all-rounder and even played minor football with Kildare but it hasn’t been all plain sailing. He has had leg breaks and muscle tears aplenty but as he enters his final year with the Academy, Adam hopes to continue to progress and to put in some good performances with the Leinster A Team. He says that training with world class coaches and alongside world class players in state of the art facilities is a dream come true but to line up alongside his heroes would be the final step in an amazing journey.

Adam’s namesake Bryan Byrne shares those goals. Having come through the schools system with Clongowes Wood College Bryan fulfilled his lifelong ambition of playing for Leinster in the Guinness PRO12 and he did so on eight occasions last season while training in the Academy. With so many first choice players away at the Rugby World Cup, Bryan hopes to have further opportunities to impress and he says that every step along the way from his days playing minis in County Carlow FC to schools rugby and Leinster Youths has been vital to his development.

“Training with internationals players who excel in your position is something that every Academy player gets to do and you realise then that the road from minis rugby to here has given you the skills that you need to be able to make the most of that. Hopefully I will get the opportunity to help future academy players with their development. That is what Leinster Rugby is all about”

It’s not an easy road but for all the Daragh Jewells out there starting out, there is a pathway and one that has been followed successfully by more and more home grown talent every year.