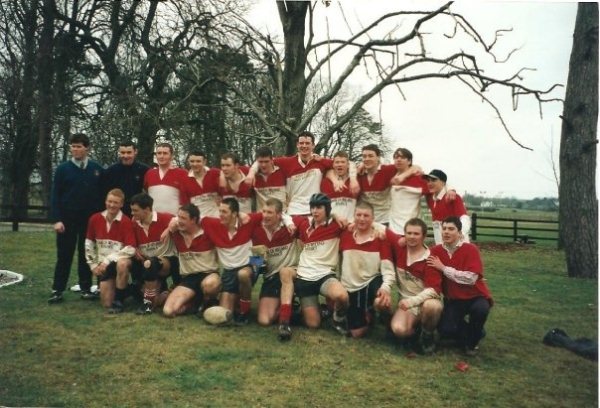 Cill Dara Rugby Club’s contribution to the year of The Gathering takes place on Saturday, November 23rd, when members from past decades are invited back to meet old friends, swap tales and play a bit of tag rugby if the urge and energy is present…

Formed a mere 37 years ago, Cill Dara RFC has transformed rapidly to become one of the most progressive rugby clubs in the North Midlands and a valued member of the Leinster Rugby family. Many who remember playing against the red and white jerseys in Kildare Town during the club’s early years may also recollect the humble ‘changing rooms’ that they used in the stables of the nearby Irish National Stud.

However, the spirit of rugby always prevailed and, through the dedication of its players and supporters down through the years, Cill Dara Rugby Club grew in terms of playing numbers, young and old. A new clubhouse and playing facilities were finally established at ‘Beech Park’ on the edge of the Curragh which has since been used by many representative teams as a training base, including the Irish Squad and, most recently, the Leinster team.

With almost 300 current youth and mini rugby players, the club retains an emphasis on sustaining rugby in Kildare Town and surrounding parishes into the future as well as occasionally producing the next Fergus McFadden or Johne Murphy, both ex-mini rugby players with Cill Dara.

Ladies rugby has also become one of the success stories for Cill Dara. Girls have always played with the boys at mini level but the recent establishment of ladies youth teams as well as the success of the Women’s Senior team is paying dividends. More girls are now staying with the sport and three of the club’s ladies have already been honoured this season with provincial and international selections.

Saturday November 23rd 2013 will be a celebration of the above and all, ex-members or not, will be made very welcome. Tag rugby matches for the 30 to 45 year olds and for those 45+ will begin at 3.30 p.m., followed by Ceol, Ól agus Craic in the clubhouse (as well as ice packs for the over-enthusiastic).

This is not a Golden Oldies event. It is a Return of Legends…