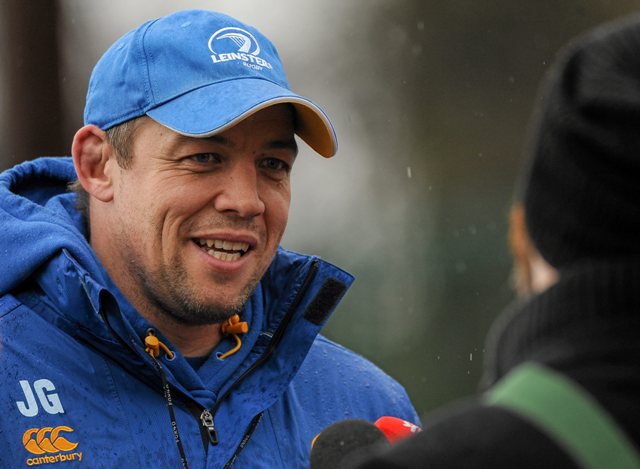 Ahead of Leinster’s sell-out game in the Aviva against Munster, Leinster forwards coach Jono Gibbes spoke to the media about the big match…

With the RaboDirect PRO12 match between Leinster and Munster in the Aviva Stadium now a sell-out, and international players returning for both provinces, excitement is building for the match between two of the biggest rivals in club rugby.

And it’s not just the supporters that are counting down the days until the game, Leinster forwards coach Jono Gibbes says the players and staff can’t wait for the game in the Aviva.

“We’re excited about playing at the Aviva – a massive crowd’s going to be in there,” the New Zealander said at a press briefing on Monday.

“I think you’ve got two top teams with two points separating them in the League, with not many games left, in front of a sell-out crowd and they happen to be the two biggest rivals in Ireland. I think that’s the story right there really.”

Gibbes believes that with the high intensity nature of the fixture, it will be the side that starts well and imposes their style of play that will win on Saturday.

“There’s always a real level to those games, a real intensity. (Munster) know slowing our tempo down is a big thing and we know what they’re going to do. It’s who can impose themselves the best normally gets an advantage.

“(Munster) are going to be coming to Dublin positive, confident in their own abilities. I think whatever has happened in the 6 Nations is behind and the real story is it’s Munster v Leinster at the Aviva.”

Want to see Leinster v Munster but can’t make it to the Aviva? Leinster A face Munster A in the quarter-finals of the British & Irish Cup on April 4th. Tickets are just €;10 here.