Gibson-Park looks back on five years with Leinster Rugby 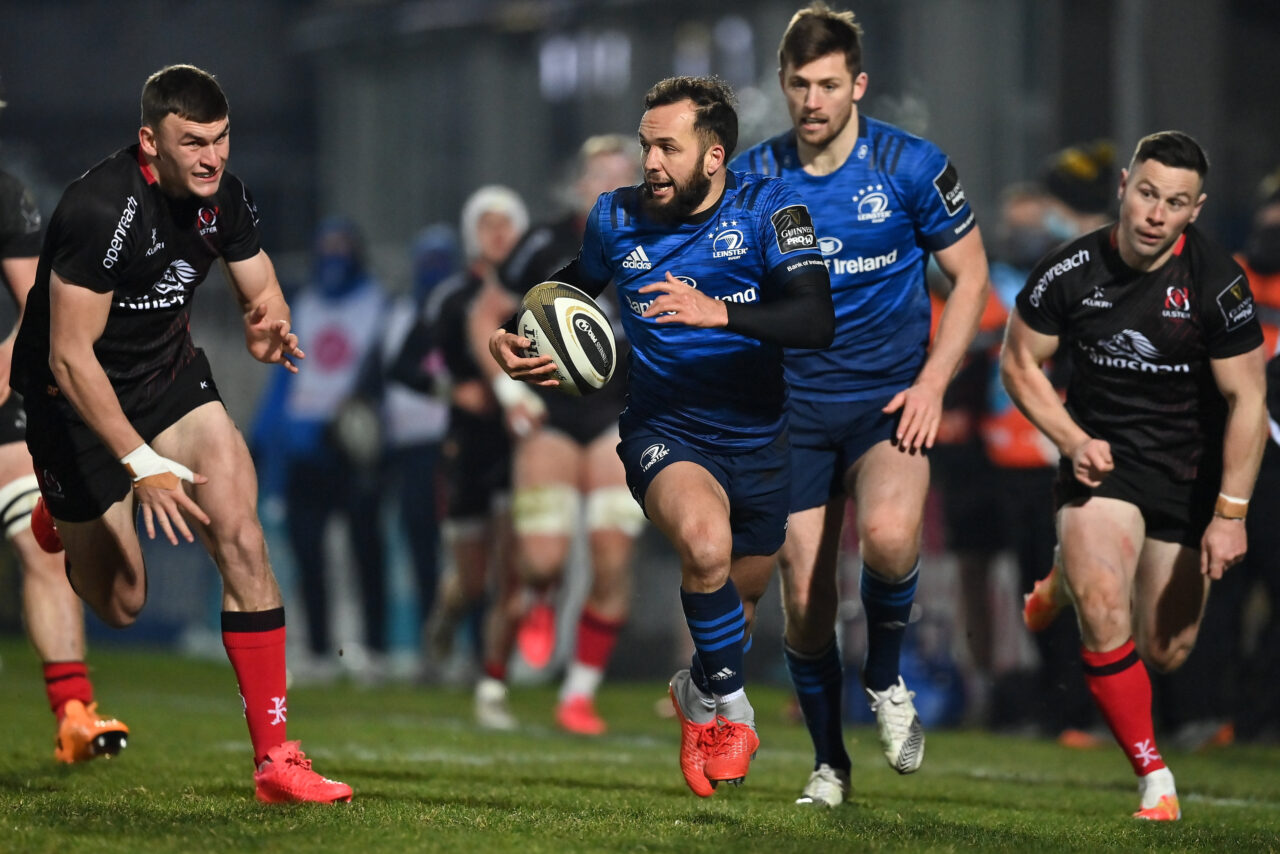 This article first appeared in the Official Matchday Programme for Leinster Rugby’s Guinness PRO14 clash with Ulster Rugby on 8 January.

Jamison Gibson-Park first landed on these shores in the summer of 2016.

A Super Rugby winner with the Hurricanes, he was barely off the plane, winners’ medal still warm in his pocket, when he was into Leinster Rugby duty playing against Bath Rugby in a pre-season friendly at Energia Park.

“It was a crazy few weeks really. It wasn’t on the horizon at all but my agent put it to me one day and, yes, it was a difficult decision to make but I discussed it with my family and with Patti and then we said, ‘why not?’. The chance to see some of the world and experience a different culture, what was there not to love about the opportunity.

“We really haven’t looked back and as a family we have settled really well here.”

In the crowd that evening for the game against Bath in Donnybrook were his partner, Patti, and their daughter Isabella, then barely 18 months old.

It was a journey that fellow kiwi Hayden Triggs had made a year before, uprooting his family from New Zealand to Dublin.

But while Triggs was a 34-year-old veteran of the professional game, Gibson-Park was still only 23, still finding his feet.

As he looks back now, he realises it was a lot to take on.

“I was still so young. Just 23 and maybe I didn’t give it the proper careful consideration that I should have.

“Young family too and maybe we didn’t appreciate then what a big change it would be but we were just really keen to get over to this side of the world. 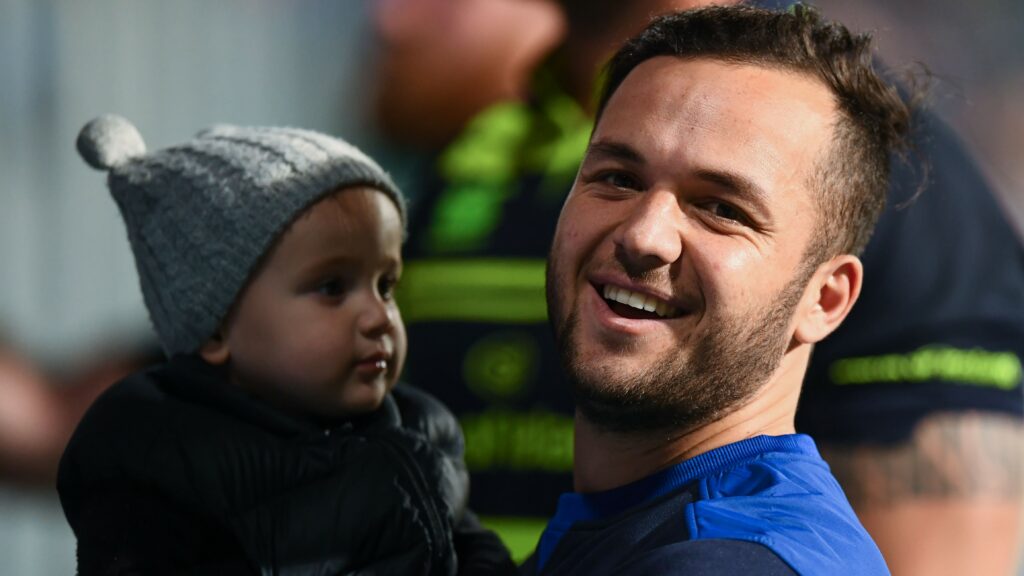 “Yes there were so many great things about it and the opportunity to play with a club like Leinster but it’s tough.

“Not just for me but for Patti as well. But thankfully we have settled really well and Isabella is thriving. She’s now in school – well she was until this latest lockdown – and we have another little girl as well, Iris. It’s awesome. She’s 15 months old now and wrecking the gaff and tearing up the place as you can imagine!

“There is no better feeling in the world than coming home from training and in to the house to them. We love it here and long may that continue.”

That first season in Leinster blue saw Gibson-Park play an impressive 29 times as the team reached the semi-finals of the PRO14 and of Europe.

With that level of exposure, it wasn’t long before tongues started to wag and talk of an Irish call-up intensified in particular as the end of his three-year residency period drew nearer.

“It’s all noise really because you have to just focus on what is in front of you and that’s a really tough battle with the other nines we have here in Leinster. That’s the biggest thing in my control so you focus on that.

“You’re right though! There was a lot of it and I kept getting asked but I had to just focus on playing well for Leinster because, beyond that, it was really outside of my control. There are so many quality nines in Ireland as well and I didn’t want to be disrespectful to them either. They were in there and it was up to me to work hard and to earn my shot and then see from there.”

Playing 29 times in his first season and 22 times in his second, is all the more impressive when you consider the rule that impacted on himself and Messrs Fardy and Lowe in that second year.

In summary, only two of that three could be in a match-day 23 at any one time. He played in the Champions Cup final in Bilbao in 2018 but missed out two weeks later in the Guinness PRO14 Final at Aviva Stadium.

Frustrating yes, but it hasn’t sullied his recollection of his first trophies with Leinster.

“Yeah, 2018 was brilliant not just for the wins but the way we managed to bounce back from the two semi-finals the year before because that was a serious low for us as a group.

“It was incredible. A season I will never forget. To back up a disappointing season like that and to go the full season again and to reach the finals. It was special.”

He can laugh it all off now and to be fair he tried to then as well!

In an Instagram post in May 2018, Gibson-Park extended the ‘three into two’ courtesy to the two lads again, offering to be their designated driver and to stay on the water while they enjoyed a few pints in the company of the two trophies!

But here he is now. Over four years later, Irish qualified and capped, and closing in on a century of Leinster appearances.

It’s been some journey.

His first experience of international rugby. How was it?

“It was crazy, eh? Being there in camp with Ireland and just learning off the other boys. There were challenges, for sure, it was like being back in school for the first three weeks! It was proper head in the books stuff!

“It was difficult with Covid going on and living in the bubble and then there was the time away from family. I have obviously done trips abroad before but this was an extended period of time so that was difficult but it was the same for everyone. Everyone in society was taking a hit. But, what an experience to train with those lads and then to play with Ireland.”

What was it like training with scrum halves like Conor Murray that had been in his sights as an opponent and to now be sharing a common goal with them?

“It was awesome. Just to get their take on things but to be fair it wasn’t just the half-backs, it was everyone really. Fierce competitors on the pitch and now getting to know them as people.

“We had some great time on the field, working hard together but then, when the time allowed, good craic off the pitch as well.

And then it was time to make his debut.

Off the bench against Italy in the Six Nations, but of course due to Covid-19, in a game played in October. And in an empty stadium.

What stands out for him?

“The debut was awesome. Obviously the team getting the win first and foremost but then doing it with the other Leinster lads, Will, Hugo and Ed as well. Such different journeys for us all, some crazy journeys, eh, but us all getting to that point together was really special.”

Of course, with Covid-19 impacting, there was no Patti in attendance, no Isabella running onto the pitch into her daddy’s arms.

Instead, it was left to Patti and a few family members to look after celebrating the moment for those new caps.

“It was lovely. The Irish management basically arranged for videos to be sent in to us and it was awesome. Just to see what it meant to the families of all the players who couldn’t be there on match day to celebrate with us in person. It was awesome.

“Patti was put to work! And it wasn’t easy! My family are tricky to track at the best of times but she got there in the end and did a brilliant job. My folks, my grandparents, my brothers, cousins. It was brilliant. She did a great job. It was a massive lift for us all to get those personal videos to mark the occasion.” 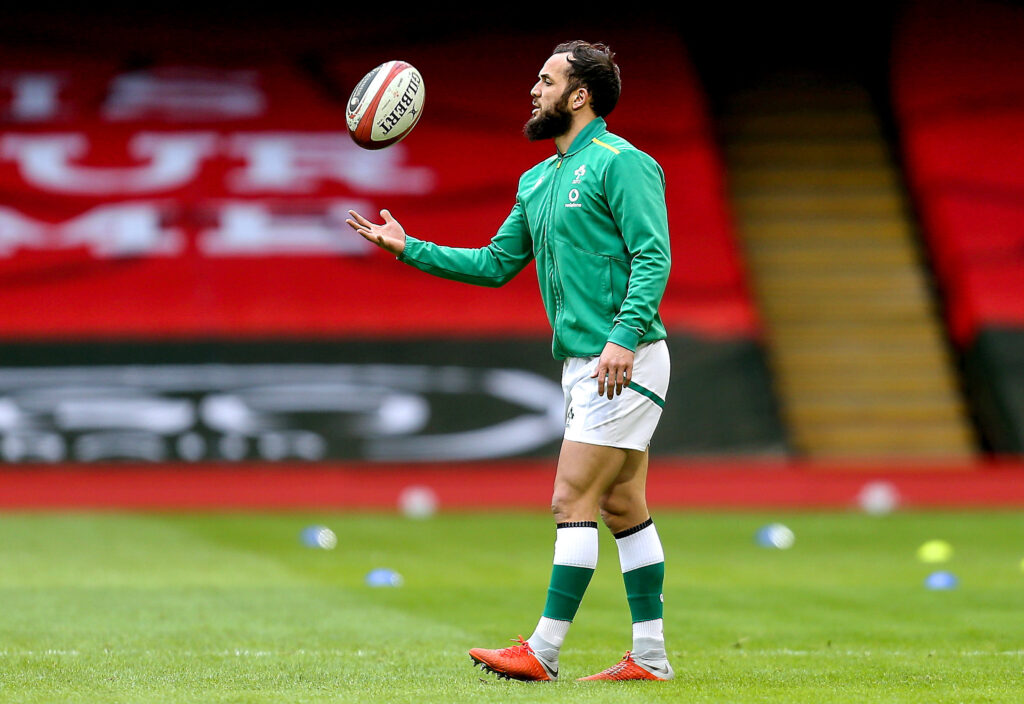 And while he loved his own personal video, he mentions with equal appreciation the video presented to Ed Byrne.

“As I said earlier, everyone is on a different journey but Eddie has had a hell of a tough one. His video was probably the most incredible of the bunch. Nobody knows how tough that is. To be out of the game for so long and to stick at it and to keep going…yeah I think we will all remember that video and the sentiment expressed in it.

“Everyone was chuffed to bits for him.”

His own road to that first Ireland cap started on Great Barrier Island in New Zealand and while he admits to having little rugby in his formative years, it took off when he went to school.

“I think most kids in New Zealand grow up with that rugby buzz but to be fair there wasn’t much of a rugby influence on the island. Maybe a bit at the weekend, you’d pick up a ball and have a bit of a run around but there wasn’t any team as such to play with.

“But it is the national sport in New Zealand so it is everywhere or was in my circle but really it was when I was 11 or 12 and got to school that it took off but even at that it wasn’t until much later again and when I left school that I felt it could actually turn into a career.

“I genuinely never thought I could play pro footie and yet here we are!”

Here we are indeed with 99 Leinster caps, six Ireland caps, a Super Rugby title, a Champions Cup title and three Guinness PRO14 titles to his name.

Gisborne Boys High School is the school in question that got him going and before long it was playing with Taranaki in the Mitre 10 Cup, before being selected for the Blues for the 2013, 2014 and the 2015 Super Rugby seasons.

After a successful season in 2016 with the Hurricanes, it was time to pack his bags and head north and time to retrace his family roots back to Ireland.

“It was a while ago now,” he laughs, “but yeah on my mother’s dad’s side, the Gibsons, they came from Armagh in the late 1800s. My Grandad came over here a few years ago actually and tried to retrace the steps and to get some more information but he didn’t get too far unfortunately but it’s definitely something that I’d like to learn more about. But the link is there with the Gibsons in Armagh.

“It’s crazy to think of the journey they took all those years ago leaving Ireland and coming to New Zealand to make a life for themselves and here I am now wearing an Ireland jersey and representing Leinster.”

This revelation could be the start of the ‘Gibson-Park to return home to Ulster’ rumours?

“Ha! Absolutely! Back to the Orchard County!”

Before that particular rumour gathers any sort of momentum, for now it’s about getting back on track and charting a course through a defining period in the Leinster Rugby season.