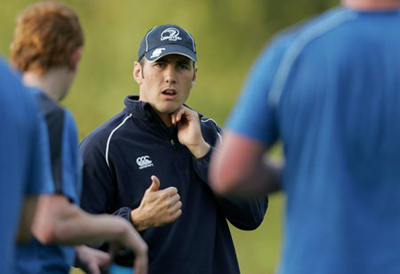 Leinster’s British & Irish Cup Assistant Coach Girvan Dempsey believes that Sunday’s Round 5 clash with Currie in Donnybrook (KO: 2pm) is “critical” for the side’s ambitions to advance from Pool A in this year’s competition…

Dempsey, who was appointed to the position of Elite Player Development Officer alongside Wayne Mitchell following his retirement last summer, said that the squad are determined to build on the impressive 38-23 victory over high-flying Championship outfit the Worcester Warriors when they welcome Scottish side Currie to Donnybrook.

“We were pleased with the response by the team to the Cornish Pirates defeat against a tough Worcester side who are flying in their Championship”, the Terenure College man said.

“The work ethic of the players in the build up to that game was at a high standard and we have tried to maintain that this week. Certainly in terms of attitude this week we are pleased, but we have to keep building because it’s an important game for us in terms of getting out of our Pool and fulfilling our ambitions.”

Last season Dempsey featured in British & Irish Cup ties against the Cornish Pirates and the Exeter Chiefs and he believes that the fledgling competition will grow in importance and stature in the future.

He said: “If you look at the likes of Dominic Ryan, Eoin O’Malley, Devin Toner and Rhys Ruddock; all four (players) have benefitted from playing at B&I Cup level and there’s a tangible opportunity for this year’s panel to also put their hands up for selection.

“Last year Mal (O’Kelly, who is the team manager of the side) and I played a couple of games and it’s an improving standard even from then which bridges the gap between the AIL and Magners League levels.

“The players realise that the senior management are making concerted efforts to attend every game, which in itself gives the fringe senior and Academy players a boost, but it was also great to see so many of the squad who had played in the Saracens Heineken Cup victory the day before in attendance last Sunday, cheering on the team.”

Andrew Conway’s brace of tries last Sunday took him to within one of Cornish Pirates’ Wesley Davies and Dempsey knows that the onus will once again be on the hosts to be ruthless in their approach to a strong Currie side.

“Currie are a powerful, traditional Scottish club who lost narrowly to Newport last time out (25-23). We have seen some footage of them and they are an impressive outfit”, he noted.

“With the Cornish Pirates running away with the Pool after their 34-3 victory over Plymouth Albion last weekend we know that we have to keep up with them as there’s a chasing pack in the table, with games in hand.

“We’re aiming to reach the knockout stages, so Sunday’s game is critical in terms of fulfilling our ambitions.”