Glory for Mullingar and Arklow in U-14 finals 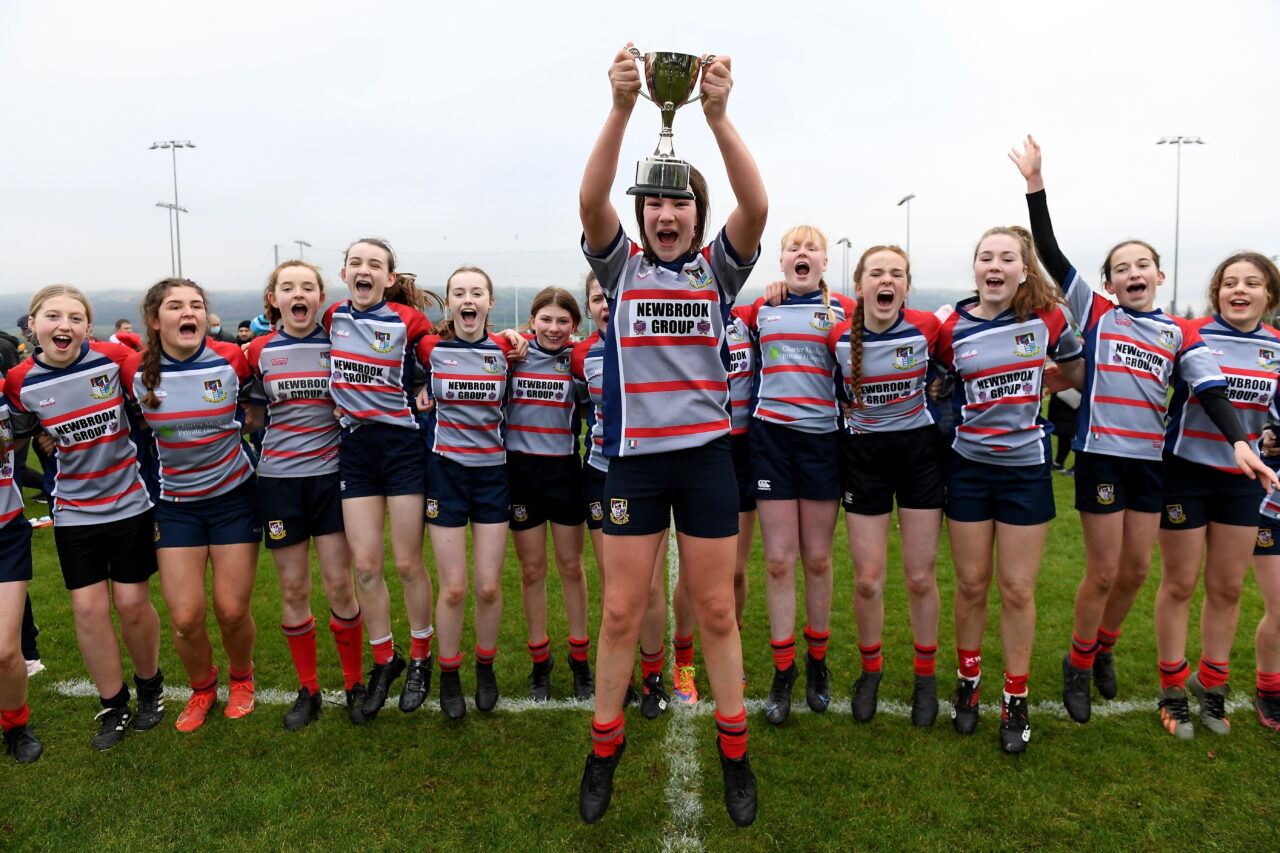 The Bank of Ireland Leinster Rugby Girls Cup and Plate finals day kicked off with the U-14 contests at IT Carlow on Saturday.

A very strong Mullingar team brought home the cup while Arklow won the plate on the ‘first try’ rule following a 27-apiece draw with Dundalk.

Magnificent Mullingar had too much power and pace for the Sharks in the Bank of Ireland Leinster Rugby U-14 Girls Cup final at IT Carlow on Saturday morning.

The early 11 0’clock kick-off did not limit the enthusiasm of these two clubs as Sharks – an amalgamation of Old Belvedere, Terenure and Suttonians – had to rely on their wits to combat the powerful midlands club.

Mullingar were quickly into their stride, Orla O’Brien accelerating through tackles for the opening try in the third minute.

The lead was increased when Orla Rijksen took possession of the ball inside her own half and Ruby Kelly sped around the outside of the cover to the posts, making the conversion easier for Rijksen to make it 12-0 in the sixth minute.

In between, the Sharks had shown enough to threaten through the passing of half-backs Alexa Murphy and Aina Fernandez and the running of Bella Devlin and Lauren Burke.

They grew into the contest, putting some nice moves together but without the penetration needed for the scoreboard.

Mullingar took advantage of their opportunism when Charlotte Butler-Clyne turned in a try from turnover ball, Rijksen converting for 19-0 in the 14th minute. 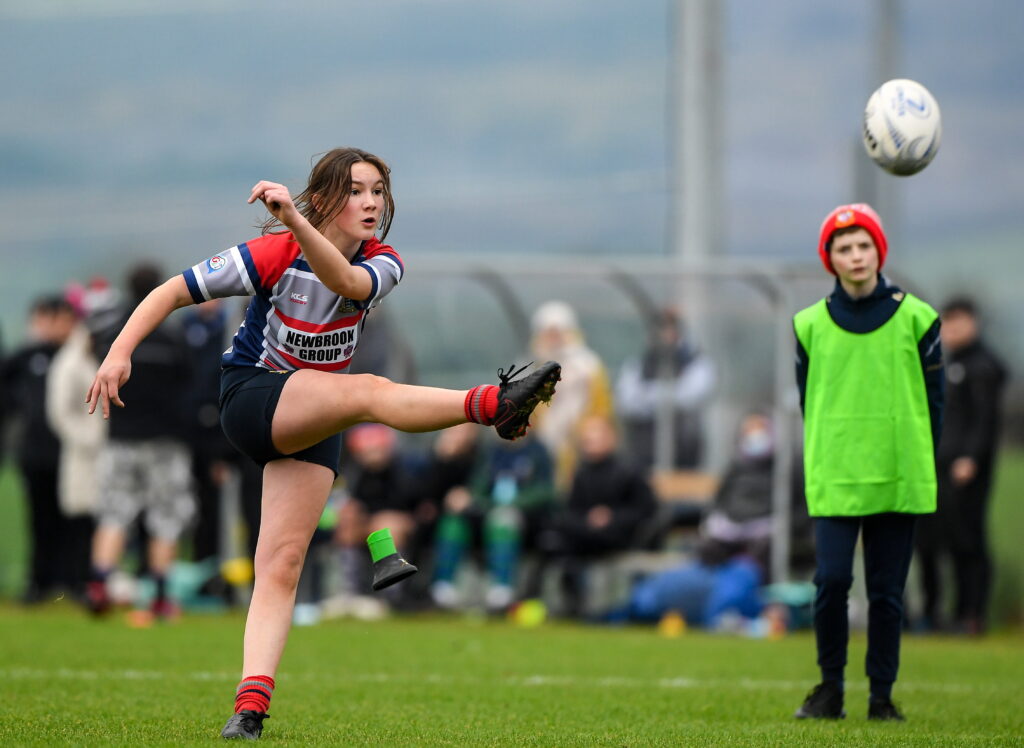 The nimble Aina Fernandez was the driving force behind the Sharks, working the tap-and-go to keep the ball and make inroads into the Mullingar 22.

Just when the Dubliners looked like biting back, O’Brien had the stamina to outflank the Sharks from distance for Grainne Cleary to convert.

The ability of the Midlanders to strike from long range was again illustrated by No 8 Jayne Charles’ effort.

Then, Sharks’ Fernandez popped up with the ball on halfway, weaved between tacklers and moved away from chasers for a spectacular try, converting for 31-7 at the half.

Mullingar continued to trouble the scoreboard from a break by Butler-Clyne for Cleary to convert in the 37th minute.

It was a testimony to the Sharks willingness to keep going that they struck back from a sustained attack in which Ava Derry grounded the ball.

“That team has been together all the way since they were U-8s. They are an exceptional bunch,” said Mullingar coach Ray Murphy.

“There is a huge drive in Mullingar. We have a brilliant girls youths set-up. Our goal is to have two teams in every age group.”

The Sharks are not as well-developed, in terms of game experience. The bonus of making a final was not lost on coach Emerson Devlin.

“It has been a good experience. We have to overcome obstacles in having three clubs pull together to play as the Sharks,” he said.

“It is our girls first season playing in a competition like this. They have made a lot of progress. That is what we want to see.

“They have thoroughly enjoyed the experience. We know they will be back and we want them to bring their friends with them.”

Olivia Burke’s first try of the game was the difference between Arklow winning the Bank of Ireland Leinster Rugby U-14 Girls Plate final at IT Carlow on Saturday morning.

This really was a titanic struggle right from the beginning. Neither club could have known how decisive the first try would turn out to be when tighthead Burke crashed to the line in the seventh minute.

It was backed up by a second from Jade Carroll and another from Freya Molloy as the Wicklow club looked to be in control. 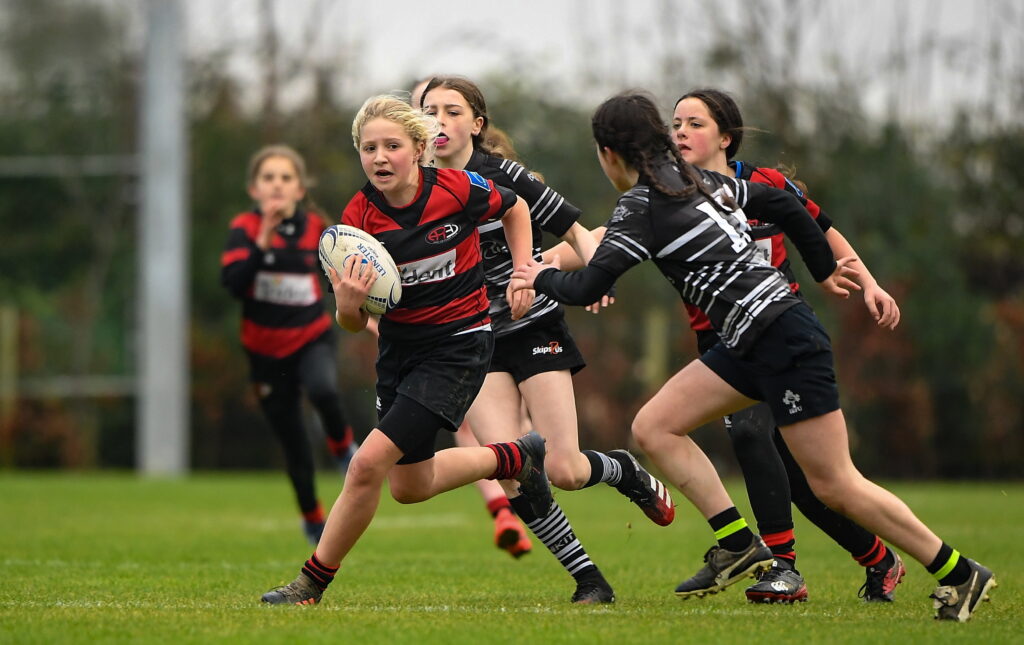 The outstanding individual impact came from Dundalk wing Alysah Hollywood, the first of her hat-trick of tries arriving, while her second and a touchdown by Ellen Bermingham kept them in touch.

Arklow led 22-17 going into the final quarter. They looked to have sealed the win when Burke carried through bodies and centre Ruby Healy made a powerful burst to the posts for Sophia White’s conversion to make it a 12-point lead in the 55th minute.

From this position, Dundalk strung a number of excellent moves together, full-back Poppy Veale showing a clean pair of heels to reach the left corner.

Growing confidence enabled the Louth club to come again, Hollywood slicing through for a try at the posts which Maggie Kerin converted for a draw with the last kick of the match.

A competition rule states, in the event of a draw, the club which scores the first try will be declared the winner.

Thus, the Arklow girls’ despair at losing the lead turned to joy when they realised they had won the Plate, albeit on a technicality, in a tremendous advertisement for the game.

“This is absolutely phenomenal for us,” said Arklow Manager Kelly-Ann Conroy.

“It is a real eye-opener to show the girls what they are capable of. We have gone from nine players to 23 with this team.

“We are trying hard to build up our underage structure. Our only downfall is that we are running out of space for the girls coming to the club.” 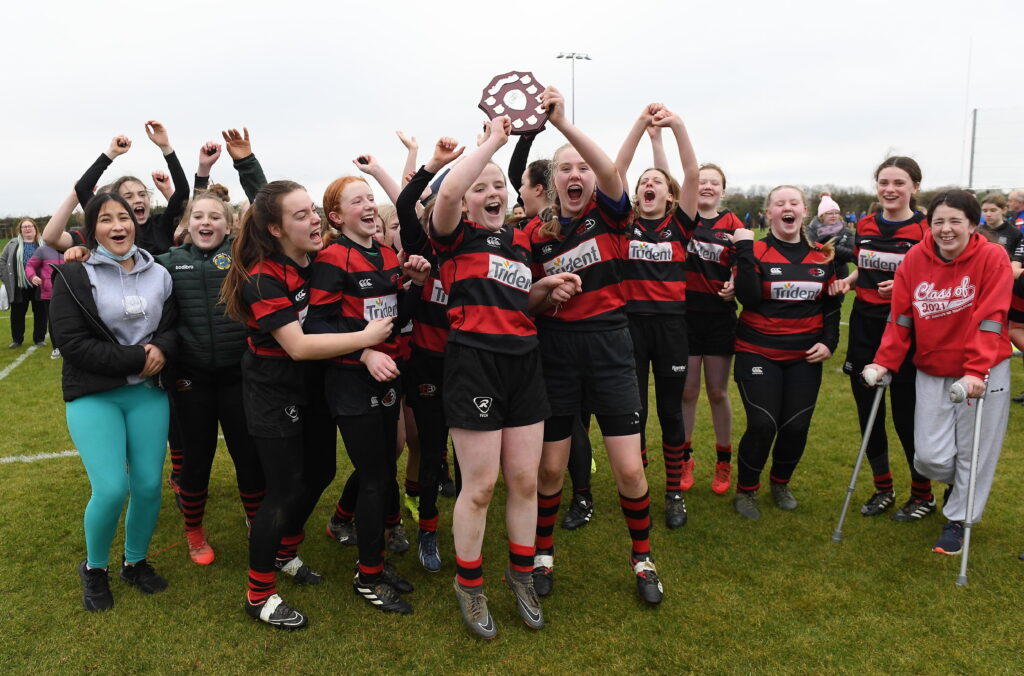 Coach Eddie Conroy felt nothing but pride, watching Dundalk coming back with two tries in the last 10 minutes.

“It took us five or 10 minutes to get going and that cost us,” he said.

“Once we did that, we put a lot of pressure on Arklow, used our strength, our speed on the wing, and I felt we finished really strongly.

“Unfortunately, the rules are the rules. We have no complaints. We knew the importance of the first try before the game and it made the difference in the end.”