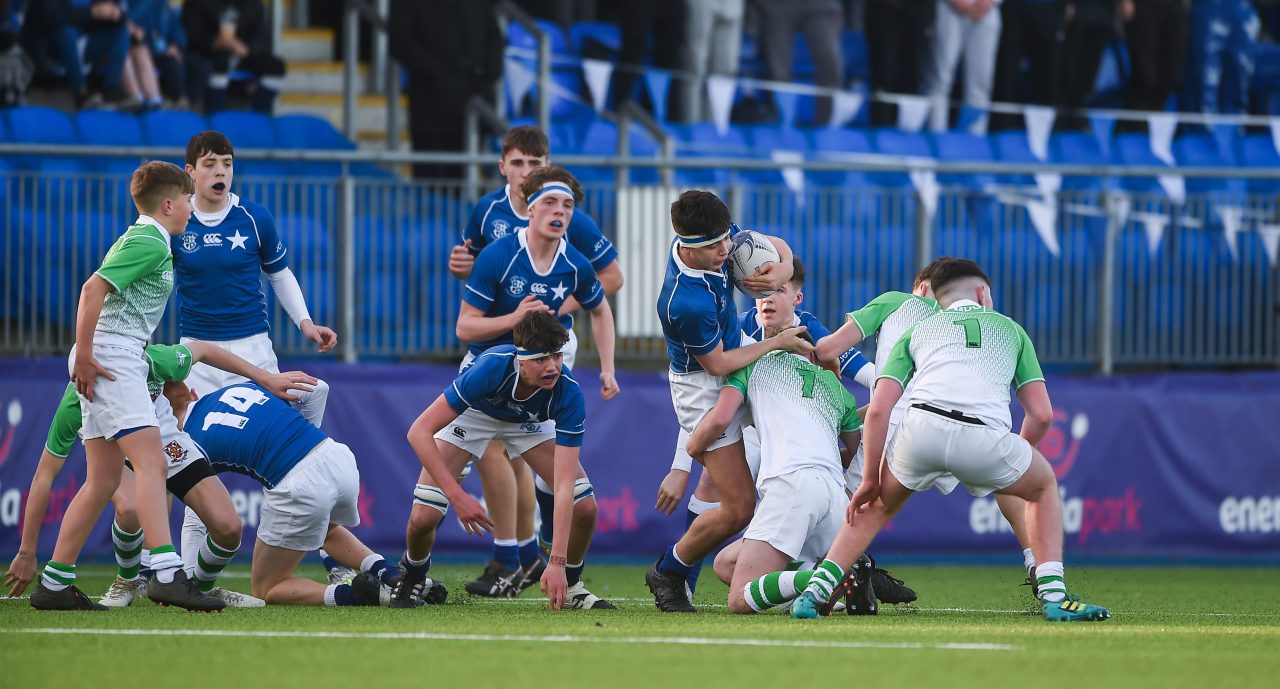 St Mary’s College have seen off Gonzaga College to seal their place in the draw for the Second Round of the Bank of Ireland Leinster Rugby Schools Junior Cup.

In an exciting contest at Energia Park today, it was Mary’s who made the most of their time in opposition territory, largely thanks to their forward power.

After an opening quarter where Mary’s held the initiative and rarely stepped foot in their own half, Noah Johnson barged over from close range, his effort converted by Cillian Jacobs.

After Gonzaga had managed to hold the Mary’s lineout maul at bay, they worked the ball across the line before Johnson got his second attempt and he made it count.

That score only prompted Gonzaga and they swiftly replied through Oscar Parceir, the winger was on the end of a flowing move across the pitch and with their first foray into enemy territory, it was suddenly 7-5.

A big defensive stand was needed from ‘Zaga to stop Mary’s extending their lead and they guarded their line admirably until they were awarded a scrum.

At the other end, Andrew Sparrow performed a heroic last-gasp tackle on Sid Love to stop him from touching down just before the half hour mark.

The early second half battle was much the same as the first, the Rathmines school enjoying the better possession.

And, also similar to the first half, they were given their just reward with a try coming off the back of a big drive from their pack.

Aaron O’Brien was the one with ball in hand, going in underneath a mass of bodies to stretch the lead, Jacobs again converting.

They nearly went further ahead in the 45th minute but scrum half Gavin Mulvihill was judged to have knocked the ball on in his attempt to ground.

By the time Stephen McMahon kicked a penalty for ‘Zaga in the 54th minute, the game had truly come to life and it certainly provided them with a confidence boost.

The all-important score came late on when O’Brien was once again the catalyst in a strong Mary’s drive, the flanker picking up his second try of the afternoon.

Without that score, Gonzaga captain Paul Wilson’s try immediately after would have been more than just a consolation for his team. And it very nearly was more than that as Gonzaga came at them once more.

A penalty allowed them go to the corner only for Ruadhán Smyth to stick a hand up in the lineout to pull the ball down, rescuing Mary’s in the process and they get their name into tomorrow’s draw.