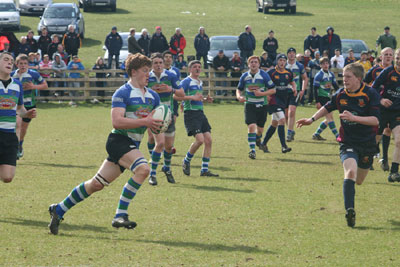 This semi final win ensures the Gorey RFC U-17 squad represent their club for the 1st time and Leinster in the IRFU All-Ireland Premier Youth U-17 final against the Munster or Connacht champions who have yet to play their semi final.

The Ulster champions unbeaten prior to this game other than one defeat early in their season started the stronger in the first 15 minutes. In this period Gorey were slow to the breakdown and showed a lack of urgency on the chase and had little possession of the ball. Banbridge played it tight using their huge no 8 to break the gain line time and time again and used accurate kicking to the corners to gain a foot hold in the Gorey 22.

Ban’ were first to cross the line after Gorey were penalised and deemed to go offside. They chose to kick to touch and attack off the lineout as opposed to take the easy three points which turned out to be a very good call. The throw in from the Ulster champions was accurate and long to their Flank at the back who went over the line to score the first points of the game. The try was nicely converted to put Ban in to a 7 point lead.
Banbridge pinned Gorey in to their own 22 with the aid of their big back 3 and very clever and accurate positional kicking.

It was on the 20 minute mark Gorey showed why they are Leinster champions when they raised their game and the intensity of their tackling causing a number of turnovers. Gorey now with ball in hand looked very dangerous. The backs and forwards combined beautifully to attack their opposition in open play moving the ball swiftly along the line.

The pressure was now on Banbridge who conceded a penalty just outside their 22. James Nolan put his kick straight through the posts which netting a deserved 3 points. James kicked another penalty 5 minutes later after Ban were deemed to infringe by the Referee. The score was now 7 – 6 to the Ulster Champions. It was 10 minutes to the break and Gorey were first to the Breakdown and receiving quick ball. The pressure was on and the holes began appearing in the Ulster men’s defence particularly out wide. The Ban defence held Gorey through magnificent try saving tackles. However in the last minute of the first half with the ball moved out wide Andrew Walsh went over in the corner for Gorey’s first try. The score going in to the break was 11 – 7 to Gorey.

Ban started strong in the 2nd half but on this occasion Gorey were not caught by surprise. What followed was a very competitive game of Rugby full of big tackles and lovely offloads from both teams. There was a lot at stake as both these teams are champions of their respective province. Gorey was next to score when once again they used the width of the pitch spreading the ball out wide to Andrew Walsh who finished beautifully in the corner bringing the score to 16 – 7 to Gorey.

Banbridge showed why they are the Ulster champions with a determined 10 minute spell in the Gorey half. Once again Gorey’s tackling and Defence was excellent preventing any penetration. Gorey were penalized for infringing and Ban opted for the kick at goal. The ball rebounded off the cross bar and in to the attacking Ban players and again Gorey were penalized due to the pressure they were under. Ban took the penalty quick and were held inch’s away from the Gorey line. Through sustained pressure Ban broke through the Gorey Defence just right of the Gorey posts. A good conversion brought the score to 16 – 14 to Gorey. The game was now all to play for. Banbridge came back looking for more from the kick off but Gorey were awarded a scrum on the half way line.

Stephen Duke the Gorey no 10 received quick ball and with two dummy runners coming in to the line a gap opened which he exploited and made it to the 22 where he popped a pass to Sean O’Connor who went over for a Fabulous try. At 21 – 14 both teams knew the next score was critical. However it was Gorey who made the ground from the kick off and returned to the Ban 22 meter line. Once again the backs and forwards from the south east team combined to play an open style of rugby which created holes in the Ban defence putting James Nolan in for Gorey’s 4th and final try bringing the score to 28 – 14.

Gorey got a penalty in the last five minutes which James Nolan put between the posts to extend the lead to 31-14. In the final minute of play Banbridge went in for a well executed try from a quick penalty bringing the final score to 31 – 19.

It is with intent the only players mentioned were those who scored as all the players had a season best performance. The style and spirit of the rugby played was a credit to both teams. The full squad of 22 players got game time which shows the dept and value this team has on all 22 players.