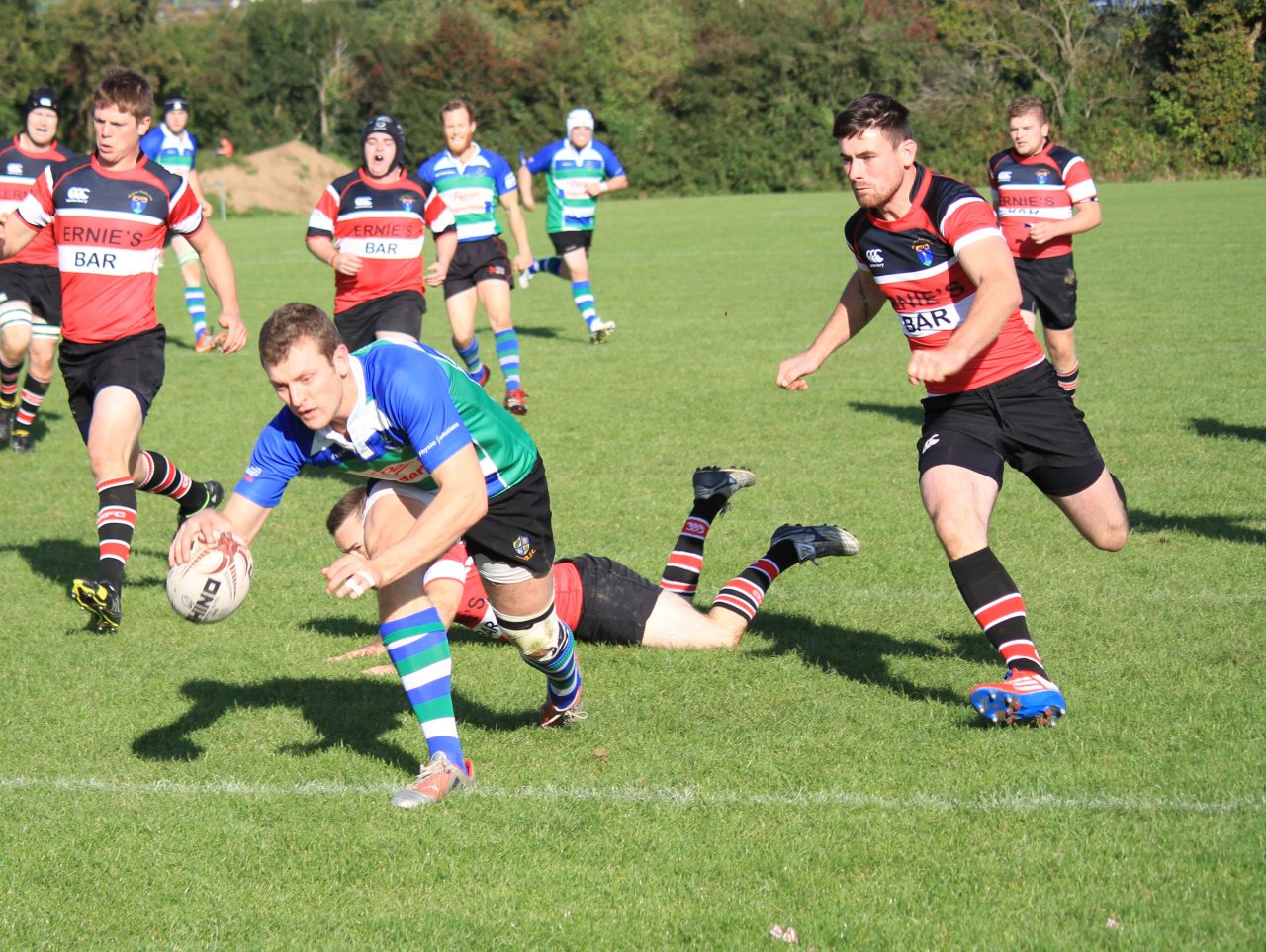 This game was billed as the clash of the day as the two early pace setters in Division 1B like to play an open and attacking brand of rugby. The huge crowd came expecting a cracking game and they were not disappointed. The ideal weather conditions suited both teams, and the home team were first out of the blocks after sustained pressure saw Wicklow penalised for Shane Luby to slot over.

Further pressure saw Gorey extend their lead when Shane Luby cut through the Wicklow defence to send Nevil Copeland through for a fantastic try which Shane Luby converted. Gorey should have extended their lead with another penalty and Wicklow were themselves unlucky with two penalty chances. Also a fantastic try saving tackle by Jeff Dunne kept the Gorey line intact. The halftime whistle sounded with Gorey 10 – 0 up which was probably a fair reflection on the first half.

Wicklow kicked off the second half with the breeze at their backs, but it was Gorey who drew first blood when Shane Luby sat back in the pocket to land the perfect drop goal. The big Wicklow pack worked hard to get themselves back in the game, and a penalty in front of the posts reduced the score and saw Gorey loose a man with a yellow card. Wicklow started moving the ball wide but the Gorey defended well.

Eventually Wicklow did score a try in the corner to reduce Gorey’s lead to 13 – 8. Gorey stayed focus when in other years they might have panicked. The backrow of Jordan Ahern, Ben Horan and Jeff Dunne were very influential in the closing minutes and as Gorey closed out the game they pushed Wicklow deep into their 22 and after sustained pressure Ciaran Allen crashed over, to take the score to 18 – 8. But Wicklow never gave up and secured a bonus point with a late penalty in injury time with the final score at 18 – 11.

Gorey had some outstanding performances on the day with Jeff Dunne, Jordan Ahern and Adrian Copeland the pick of a strong pack,and Nevil Copeland and halfbacks Gareth Bater  showed well in a very impressive backline. Gorey are away to Longford next Sunday, while the next home game is on Sunday November 2 against old rivals Kilkenny with a 2.30 kick off.

The Gorey J2’s went into this game with Wicklow full of confidence after a good win over Tullow last weekend. The team is a mixture of youth and experience and were well prepared by coaches Lloyd Furlong and Philip Jones for a big test by a very good Wicklow team.

The game started with Wicklow moving the ball at every opportunity and Gorey had to defend well to keep them out. But Gorey drew first blood when Sean O Connor landed a penalty from near the half way line. But this seemed to kick Wicklow into gear and a penalty drew them level. A converted try followed before halftime to leave the score at 10 – 3 to the visitors.

The second half saw Gorey come back into the game and a Clinton Furney penalty reduced the visitors lead. But Wicklow proved to have that bit more in the tank and scored a well worked try, to put the game beyond the home team. Gorey to their credit never gave up and will learn from this game as Eoin Walsh rounded off a Gorey attack with a try to reduce the score to 23 – 11.

Gorey will learn from this game as Wicklow are one of the stronger teams in this competition. Best for Gorey were Niall Cousins and Ciaran Hennessy in the forwards while Jack Cleary and Alex Rowley were the pick of the backs.

Gorey J2 ‘s have no game next weekend, their next game is at home to Kilkenny on Sunday Nov 2.