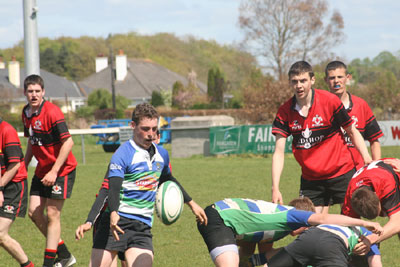 The opening try and conversion by number 12 James Nolan, created by a fine backline movement in the first few minutes of the game, was a false illusion of what initially appeared was going to be a walk in the park for Gorey.

Gorey held territorial advantage and had the majority of the ball throughout the first half but could not capitalise effectively on their possession. The early departure of outhalf Stephen Duke, due to a tendon strain, changed the dynamics in the backline. Despite having a more than adequate replacement in James Nolan, Gorey were beleaguered with far too many uncharacteristic handling errors in the backs resulting in loss of possession at critical times.

Poor work in the lineouts and breakdowns added to their self inflicted burden, denying them the chance of increasing their lead several times. The gritty defensive work and big forward drives by Tullamore ensured that the Gorey team had to work hard for each ball. The perseverance paid off and they were eventually rewarded with a fine hard driven try by Captain Eddie Earle in the corner after 25 minutes of play. With the kick going wide Gorey went into half time with a 12 – 0 lead. This was to be the final score.

Although there were no points scored in the second half Tullamore came out with a roar and a hiss, taking the game to Gorey. Under blistering hot conditions, on a pitch hard and dry, the physical battle for ascendancy by Tullamore was only outshone by the gutsy, determined defence of the Gorey team. Tullamore had 60% of possession and territorial advantage, camping on the Gorey line for play spans that lasted 5 minutes at times, only to be thwarted by organised defence, big hits and long raking clearance kicks. Tenaciously they fought back but the resilience of the Gorey defence was too good and Gorey showed why they are indeed All Ireland finalists, Leinster Premiership Champions and on this day, deserved winners of the Leinster Plate.

Gorey travel to Naas RFC on Sunday where they will play against Galwegians (KO: 1.30pm). Supporters are encouraged to accompany them and most welcome to watch the Under-17’s continue on their historic journey as ambassadors for the Gorey RFC and the Leinster province.