Greystones A Class Above Wanderers in Shield Final 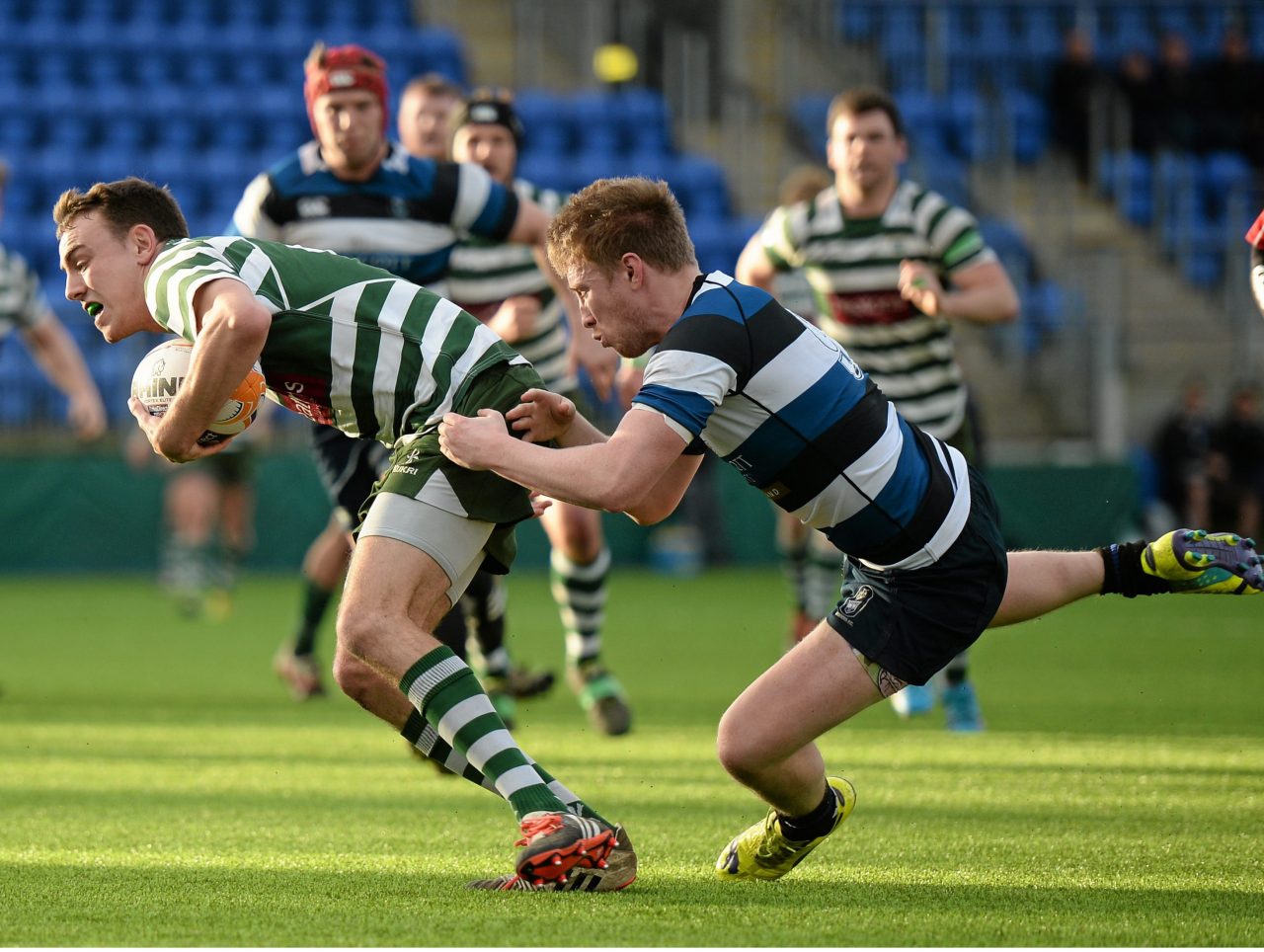 Ten-try Greystones were a class above Wanderers in an open, free-flowing Bank of Ireland Leinster Senior Shield final on a mild afternoon at Donnybrook yesterday.

‘Stones were quickly out of the traps; wing Padraig Geoghegan slipping a ball to full-back Darrah Callan. Number eight Bobby Clancy bounced a defender and hooker Kevin Moes almost made the line.

It was left for centre Barry Lynn to slot a fifth minute penalty for the lead.

Wanderers were inclined to gain ground only to give possession away with sloppy care of the ball in handling or at the ruck.

Their turnovers were used against them as wing Ferdia Kenny’s chase forced a lineout out of replacement Tommy Ellard.

The lineout throw from Moes went to hand. The maul found traction and the hooker peeled away for a try, calmly converted by Lynn for 10-0 in the tenth minute.

The first sign of stress came when wing Lorcan Burke flew through the middle. Again, Wanderers failed to maintain the attack.

A burst from lock Brian Quill had ‘Stones scrambling in defence where they gave away a penalty which fly-half Ciaran Wade struck in the 16th minute.

The Wicklow club’s scrum began to exert serious pressure, earning a penalty on halfway and a turnover for scrum-half Jason Curran to snipe the short side for a well-worked try, converted by Lynn for 17-3 at the end of the first quarter.

The sheer speed of right wing Kenny was far too much for a narrow defence as he outstripped two flat-footed ‘Wanderers’ for Lynn’s extras to stretch it out to a 21-point gap.

The work of replacement Shane Mulvaney was turned into profit by Clancy’s eye for space, Marmion’s injection of pace and timing of the pass for Geoghegan to streak away to the corner for 32-3 in the 33rd minute.

Second row Quill found the front-foot only for Wanderers to needlessly turn the ball over for Geoghegan to counter spectacularly from eighty metres out. Lynn converted again.

Not for the first time, Wanderers worked their way into a good position. However, a crooked ball into the lineout prevented them from building on it.

They did come close from hooker John Lee’s break and Wade’s chip over the top which was cut out by Geoghegan.

They continued their good work on resumption. Burke was dangerous down the right. Wade tickled a real gem of a ball to the corner.

Scrum-half Eoin O’Shaughnessy went close and the ball was recycled for centre Rob Clune to use strong leg drive to make the line for 39-15 in the 45th minute.

Normal service resumed when Marmion’s pass and Dempsey’s eye for a gap was the key to Jack Keating steaming down the right for ‘Stones sixth try.

The confidence was up. The offloads were coming, Clancy leading the way.

It wasn’t long before they were threatening again, flanker Blake Hill twisting to the whitewash under the eagle eye of referee Tom Townend.

Wanderers wing Burke nearly made a decisive move on his feet. He was brought down and scrum-half Curran found space on an arcing run to put Kenny clear for his second in the 63rd minute.

There was still room for Killian Marmion to intercept and Geoghegan to claim his hat-trick, Marmion converting in the 70th minute.

The slick hands of full-back Niall O’Donoghue put wing Dennehy through a hole for Wanderers third.

Curran skated around the cover to send Calvin Jordan over unopposed. Marmion converted.

Then, ‘The Chaps’ Peter Brougham took advantage of sure and swift passing to find the line wide out at the death.