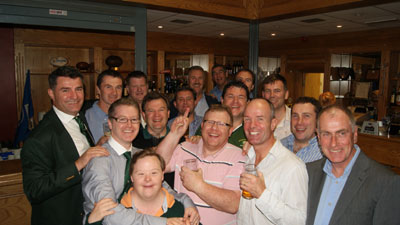 The team of 1990 were guests of honour at the pre-match lunch and have made time stand still with their youthful looks as if they were the team from last year. With the aid of some pre-match refreshments there were some tempted to don the green and white once again and help Reggie and his team.

The team included some of the greats of Irish rugby. Reggie Corrigan won 47 caps for Ireland, was part of the Triple Crown winning team in 2004, captained Ireland twice and was captain of Leinster when they won the inaugural Celtic League.

He was on the World Cup squads in 1999 and 2003. Reggie is back home at Greystones as Head Coach, Johnnie Robbie who has nine caps for Ireland from 1976 to 1981, Brian Rigney won eight caps for Ireland between 1991 and 1992 and of course our President Alan Keyes.

It was great to see the old tem reunited and on a day when Greystones enjoyed a bonus point victory and who knows about a return match some day …I hear the PS3 is very realistic these days!