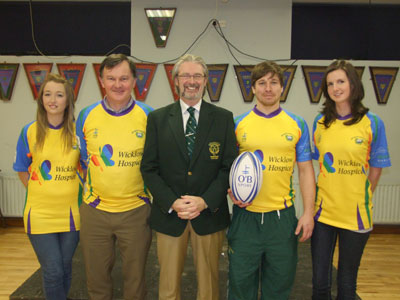 This Saturday, January 16th, sees Clonakilty making the journey to Dr. Hickey Park to Greystones, again weather permitting, for another vital game for both clubs…

There is also another special occasion with the game receipts and an auction of 30 specally designed jerseys being worn by Stones in the match, which will be auctioned after the game in aid of The Wicklow Hospice Foundation.

The Founatin are hoping to raise €;3 million over the next three years having secured a 2 acre site at Marrahmore, south of Brittas Bay, generously donated by The Columban Sisters and Stones are delighted to be able to contribute in some small measure to this.

The Chairman of the Foundation is local doctor Brendan Cuddihy, who was for many years (and indeed still looks after many of the players) the Greystones RFC Honorary Club Doctor. Brendan was most grateful to Greystones RFC for their generous gesture.

He and his collegues Dessie O’Toole and Tom Fortune, along with oher members of the foundation will be in attendance on Saturday for what is hoped is a succesful occasion both on and off the field.

We would also like to thank MSL for the sponsership of the playing jerseys.