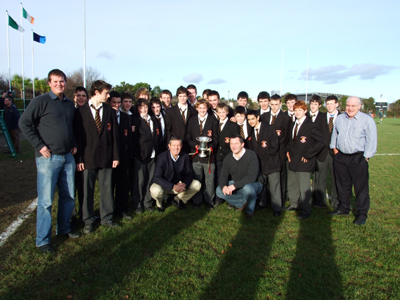 Greystones were delighted to welcome the Presentation College Bray Junior team, with their principal Gerry Duffy along with coach Kevin Conroy, to the pre-match lunch recently…

Presentation won the Leinster Junior League for the first time in its history and the proud Captain, Phillip Haughton and Vice-captain Conor Greene, along with the team received a rapturous round of applause from the large attendance.

At the meal Gavin spoke of the pre-professional era and how in the 1987 World Cup the Irish, Welsh and Scottish teams had made the 40 hour plane journey together and that the Scots and the Irish had been booked into the same hotel.

On arrival in the lobby, the Scottish coach, Jim Telfer barked out that “Ten minutes in the lobby..meet for a training run”. His Irish counterpart, addressing the Irish ladsc roared out: “Ten minutes lads in he lobby…into the bar!”

Two hours Scots later the Scots returned battered and worn, while the Irish were refreshed and lively. In a scrummaging session the next day against the Irish, Gavin claimed that we won the session on the basis that our alcohol was a contributing factor! He added that if ever he was in charge of a team, he would most definitely use the Irish system.