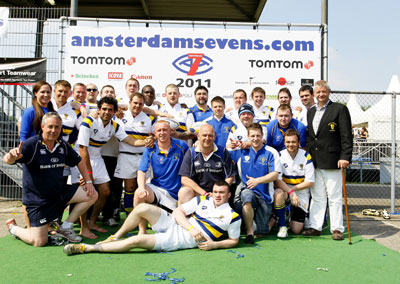 Following on from a gruelling season during which we played over 40 senior games (1st & 2nd team), the clubs end-of-season tour was to “The Amsterdam 7’s”…

This is now the 3rd largest 7’s tournament in the world with over 100 teams competing in Men’s, Women’s Veteran’s 10’s competitions.

The fact that the Heineken Cup Final was taking place on the same weekend added a little extra spice to our attendance as the only team from Ireland competing !! Also, none of our guys had any experience of 7’s rugby!!

On the 1st day we were drawn against very serious opposition, with one team consisting of English Premiership and Saracens Academy players, whilst another comprised of Welsh and Fijian Internationals – we finished 2nd in both of these tussles.

We succeeded in winning our 3rd game, and guaranteed a place in the 3rd tier event on Sunday. This led to a quarter final appearance on the main pitch against the Italian National 7’s team in front of over 2,500 spectators. Despite going in front late in the 1st half, we ran out of steam and lost out narrowly to a very good side.

The rest of the weekend afforded us the opportunity to blow off steam and visit all of the famous “museums” Amsterdam has to offer – the cultural aspect of the tour was a huge success!

This trip will live long in the memory of all those who travelled (if they have a memory left), and will take some beating next season.

Guinness Rugby Club will welcome any new members for all age groups for the coming season. Contact Tony Keogh: 087-1218026.