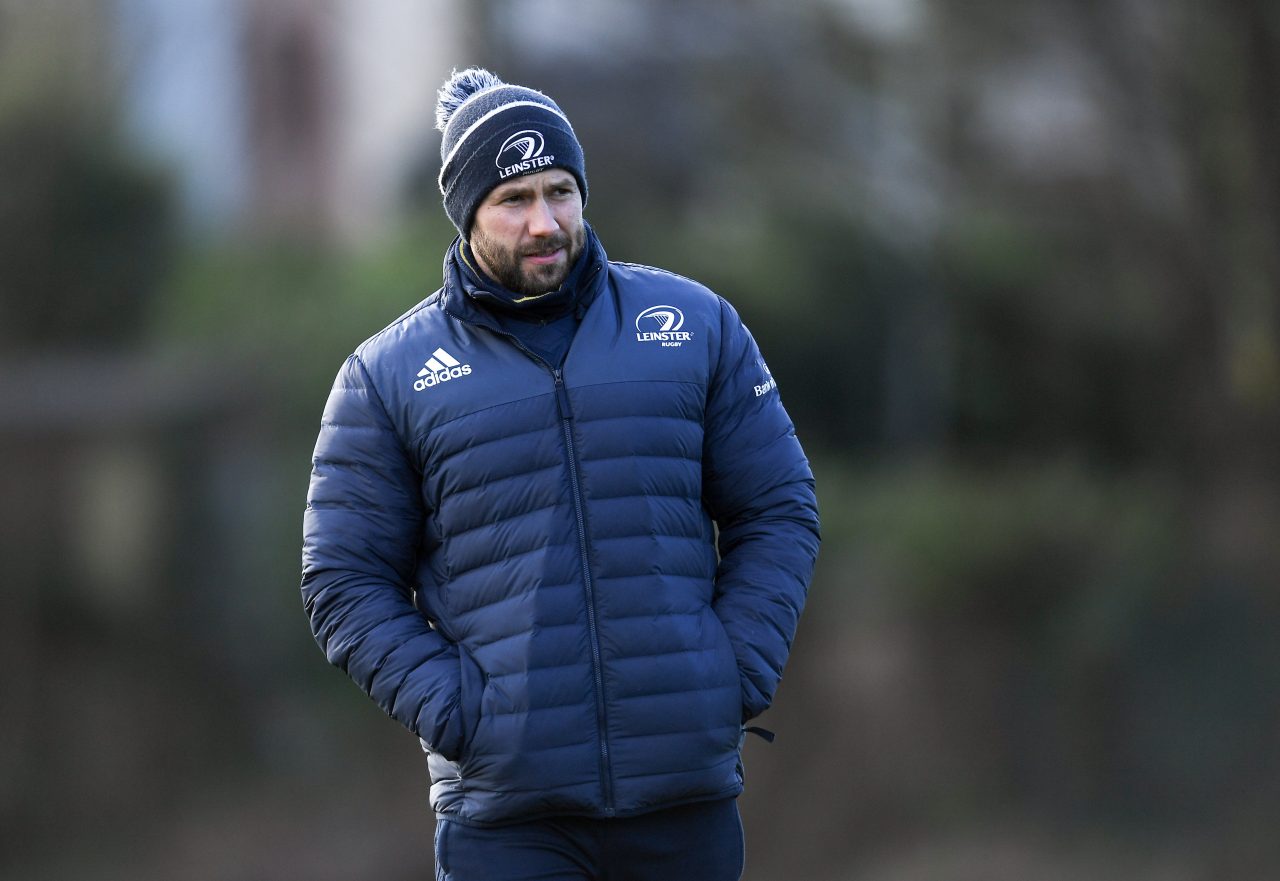 When joining Leinster Rugby as an Elite Player Development Officer in July 2019, Kieran Hallett did something that he had been aspiring to for a couple of years – get back into rugby full-time.

Since retiring four years ago, the former out-half had been working in Exeter Chiefs’ Developing Player Program, combining it with the head coach’s role at National League 1 side Plymouth Albion.

Now however, he has been settling into a new challenge and the new surroundings of Dublin, a considerably different environment for Hallett, his wife Josie and young son Hector, to that of Cornwall in the southwest corner of England.

“In terms of making the decision, it was easy. When an organisation like Leinster says they want you to work there, it’s a pretty easy decision to say yes,” Hallett says of his new life with the province.

“The job with Exeter was more a part-time role so being in every day is different. But it’s what I wanted. I wanted to get back into full-time rugby and being in this environment is pretty special and seeing the work and dedication the guys put in day in day out to be where they are is really brilliant.

“It’s a change of lifestyle from what we had in Cornwall. We were two minutes from the beach, it was quite laid back. And to experience now living in a major city and the differences that that brings is exciting.

“We’re happy here. We’re sort of finding our feet and trying to put roots down now. I see us being here for the long term.”

That move has opened other doors such as the opportunity to get involved in the coaching set-up for the Ireland Women’s team ahead of their, now suspended, 2020 Six Nations campaign.

Being able to watch the Leinster senior squad train on a daily basis has been a massive component in his personal development as a coach while the openness of the senior coaches within the Leinster staff to be used for advice is also highly advantageous for the likes of Hallett as he aims to help bring the Irish Women to the next level.

“Watching Stuart everyday coach attack and defence is something I’ve never seen a coach do before at that level with that amount of detail,” he explains.

“It’s certainly been a learning experience for me just to watch him go about his business and Leo and Robin as well. They are all very open and very welcoming, happy to field questions and answer anything you might have.

“The elements of how they train and the intensity they train at here is something I’m trying to bring into Ireland camp as well.

“The girls are only part time but when we’re in camp, we’re trying to get them to flick the switch and go ‘ok, this is how we need to train, we need to train at this intensity to get fitter, to be able to compete with the likes of England and France’.

“We’re making progress on that, the last three performances we’ve seen that, against Scotland, Wales and then England. The intensity has been there and the fitness has been there. That’s definitely a big thing I’ve taken over from here.

They suffered their first defeat of this year’s competition in Doncaster on February 23, going down 27-0 to an England side pushing for back-to-back Grand Slams.

However, Hallett prefers to look at the positives from that game, one of which was holding England to just five points in the second half where other teams have folded and seen higher totals put on the scoreboard.

“Strangely enough, I think it was still a step forward for us as a group. You look at some of the results England have been putting up in the last few games. They’ve been beating teams 50/60-odd nil.

“It was frustrating not to score a try but to hold them to one score in the second half and hearing what they were saying after the game about how they were frustrated with their attack is a big bonus for us and for me in terms of being a defence coach.

“We managed to suffocate them a little bit and frustrate them so I think it was a step forward in that regard.”

Of course, this is not his first time as part of an Irish camp, having represented Ireland Under-21s at the 2006 Junior World Cup after coming through the Irish Exiles programme.

He had some stiff competition for the No 10 jersey back then, current Ireland and Leinster captain Johnny Sexton, while other players still plying their trade for the province were also involved that year.

“Johnny was a brilliant player back then as well. It’s been quite nice watching from afar, watching what he’s done in his career. I have the utmost respect for him. It’s great to see someone that you’ve been in that environment with go on and be successful.

“It’s funny. Day one, I turned up and Seán Cronin and Dev (Toner) were around and you know when someone looks at you and recognises you but can’t quite remember where from.

“It’s been a long time since I’ve seen those guys, but it’s been great. It’s a different relationship now, coach and player, but it’s nice to have those memories of playing with those guys and fair play to them for still going.

For now, the day-to-day involves getting to know the Leinster pathway and assisting, where possible, the players that, one day, will don the blue of Leinster in the RDS Arena or Aviva Stadium.

So what is it that Hallett can bring to the table in that aspect?

“From a position specific point of view, working with the young fly-halves in the sub-Academy and the pathway, you just give them little pointers here or there but I think even from when I finished playing four years ago, the game’s changed loads.

“Having not played at PRO14 level in my playing career, it’s more the technical detail stuff that I’ve been drawing on rather than experiences, and facilitating any extra skill work that the players here feel they need, helping them with that is probably more my area.”

And although it’s still in the honeymoon period of Hallett’s time in Leinster Rugby, there has been no temptation to turn back to something more relevant to his degree in Geography just yet…

This article first appeared in the Official Matchday Programme for Leinster Rugby’s Guinness PRO14 clash with Glasgow Warriors at the RDS Arena on Friday, February 28.