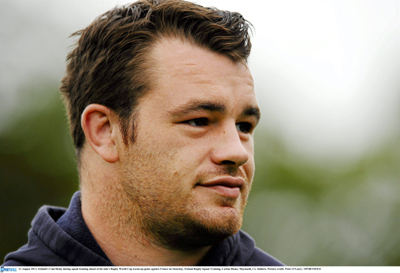 Prop forward Healy had suffered an injury to his eye during the final warm up game against England and it was decided following the match that it would be better to allow the injury to settle before undertaking the long distance commute to New Zealand.  Centre D’Arcy was a late withdrawal from the travelling party on the very day the team left Dublin after he picked up a calf strain during a recovery session that morning with the medical team feeling it was also the best option to delay his departure.

Cian Healy said: “It was a strange feeling watching the lads meet up in Dublin airport and then waving goodbye to them, but there was also a little sense of comfort for me knowing that I would at least be following them out a couple of days later.  I was getting mentally prepared for doing the journey by myself, but I got the news that Gordon (D’Arcy) pulled up with a calf injury, so I guess there was a sense of relief for both of us that we would still be travelling.

“Talking to some of the squad, they seem to have settled in really well and combined training with some time to relax and get involved in the whole spirit of the tournament.  It’s good to get that down time before we pick the pace up this week, so I think the intensity will start to rise now another couple of notches as we look forward to the USA game.

“The injury has come on fine over the last couple of days and the medical team has been keeping a good watch over it, so I’m just really excited to be finally here and get the chance to get back on the field.”

Gordon D’Arcy was also enthusiastic about finally touching down in Queenstown and getting going in the tournament. “Queenstown looks incredible and I know the rest of the lads have been enjoying the experience so far. We flew in to a little less fanfare then the squad received, but that’s a small price to pay for just getting the chance to be here and start thinking about our first game against the USA.

“There was a terrible sense of dread for me when the calf tightened up that morning and there was a couple of anxious hours before the scans came through and showed that it was not too bad and that it would not rule me out of the tournament. My focus now is to get it right and get on the field to put myself in contention for selection as soon as possible.”

The rest of the Ireland squad had their final down day before stepping up preparations for their opening game against the USA Eagles in New Plymouth.  There was no further injury news to report, with both Rob Kearney and Sean O’Brien showing no ill effects from their respective groin and knee injuries and took part in the majority of the Ireland training session yesterday.