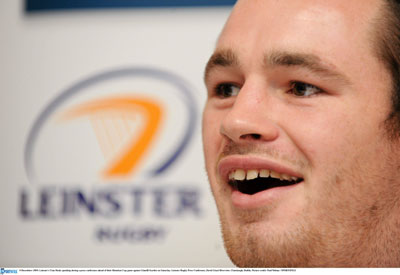 The IRFU are currently in the process of contracting Ireland based players and Healy’s new contract comes on the back of those recently awarded to Donncha O’Callaghan and Ronan O’Gara with Munster.

Healy has represented Ireland at Schools, under 19, under 20, A and full international level and at only 23 has already won 13 caps for Ireland. He made his Leinster debut in the Magners League in 2007 and has appeared for his hometown province on 68 occasions.

Cian Healy said, “I am delighted to have my new contract signed as it means I can continue to concentrate on playing for my home province and improving my game further. It has been a good couple of weeks for us and so I just want to focus on playing well for Leinster to keep me firmly in the plans of Declan and the national team.”

Leinster Coach Joe Schmidt said, “Cian is a strong and dynamic ball-carrying loosehead and it was great to see his efforts rewarded with two tries in the recent Heineken Cup win over ASM Clermont Auvergne. Cian has been impressive progressing through the Leinster Academy, into the Leinster Senior team and onto the Ireland International side. At just 23, there is obviously still plenty of scope for further development which promises real benefit for both Leinster and Irish rugby.”

IRFU Chief Executive Philip Browne said, “We began the process of contracting players as early as the summer and while it is something that can take time to complete, this is nothing new and we are progressing through the majority of those contracts that are coming to an end this season or early next season. With a fixture list of potentially over 40 matches per season and with even more games in overseas leagues where we would have no influence on the game time for Irish players, it is vital that we continue to work to retain players to play within Ireland in the provinces. It’s only in this way that we can continue to have a positive influence on their development and in particular to ensure that our international players are best equipped to contribute to the further success of Irish rugby at international level and also at provincial level.”

Ireland Coach Declan Kidney said, “For a young player like Cian who has progressed really well over the last 18 months this is good news as it allows him to continue to develop as a player in Ireland. He has approached every challenge with the same hard working attitude and if he continues to do this he can become an even better player.”